Largest Music Industries in the World 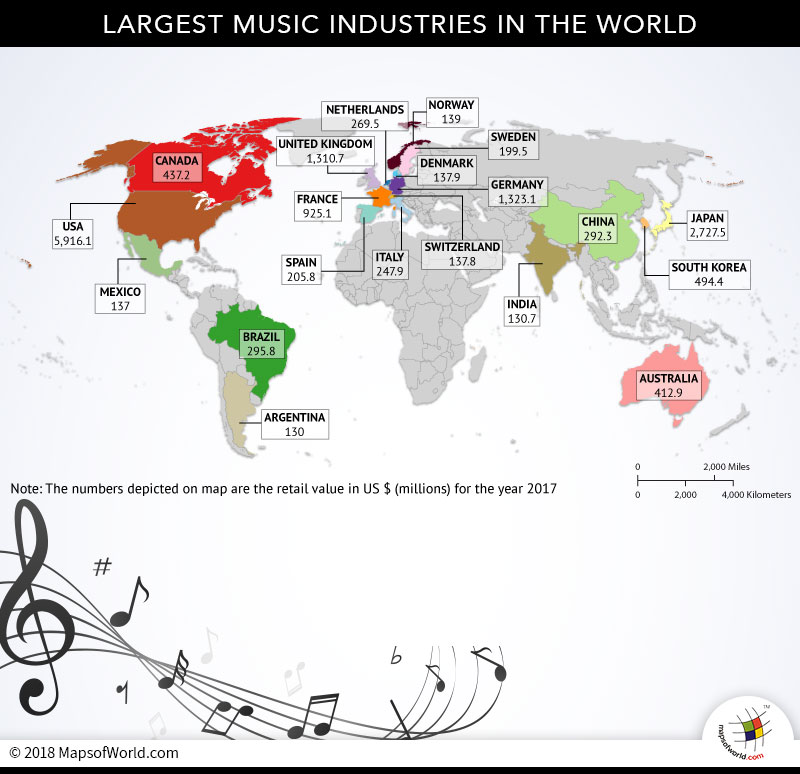 An escape for some, an inspiration for others, and sometimes even an epiphany – Music, no matter what era you talk about, continues to rule the world. The music industry has evolved with time. Gone are the days when hefty records and cassette-operated walk-mans were in vogue. Today’s generation relies more on digital music downloads and live streaming.

Songs that reaches your ears, involves efforts of a range of professionals, including producers, composers and performers. Many are employed in the sector and earn their living via this entertainment industry. In the early 2000s, the internet had brought drastic change to the world of music. The advent of digital distribution enabled people to forget traditional rules and emerge on the online platform. People indulged in both illegal file sharing of songs and in legal music purchases in online stores, while local sales have all but disappeared. Album sales in the 21st century have also declined, which is why music critics believe that the albums will soon die.

However, the music industry still flourishes in its new ways, and the retail values have only increased with every year. International Federation of the Phonographic Industry (IFPI) releases annual data accounting the revenue generated by recorded music industry. According to it, the United States has the largest music market for the last seven years. It collected USD 5.91 billion in the year 2017, as per IFPI Global Music Report released in 2018.

The talented artists from the US music industry have acquired strong international presence, and earned the love and support of the global audience. Also, the music of the United States reflects the diverse culture and multi-ethnic population. Irish, Scottish, European, Indian and even western-African influence can be observed in the songs. Numerous genres like jazz, rock, hip hop, pop, salsa and techno are popular in the country, thus garnering the attention of global audience.

The table below mentions the top 20 countries where music industry has highest retail values: