What is the average price of movie tickets across the world? - Answers 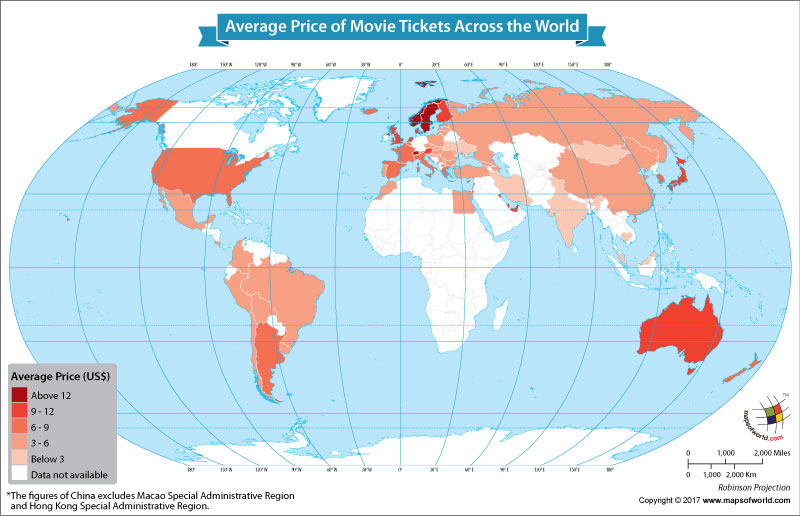 Movies are the biggest source of entertainment around the world. In every nation, there is a huge movie loving population which is willing to shell out a few dollars for a couple of hours of fun. Billions of people watch movies at theaters bringing in huge revenues for their respective nations. However, the price of tickets is not uniform across the world. While in some nations, watching a movie at a theater is quite expensive, in others it may be comparatively affordable.

Watching a movie at a theater in Switzerland means that you would have to part with a tidy sum of money. Movie tickets in Switzerland are the most expensive in the world. According to a UNESCO data, in the year 2015, the average price of movie tickets in this picturesque nation stood at $US 16.15. Cinema is quite expensive in Sweden also. Here the average price of movie tickets in 2015 stood at $12.72. In Norway you can buy tickets for $12.69, which makes it the third most expensive country in the world for watching movies at the big screen.

Countries where average movie tickets ranged between $ 9 and 12 were the United Kingdom, United Arab Emirates, Qatar, Finland, Kuwait, Japan, Australia, Denmark, Israel, Austria, and the Netherlands. Meanwhile, watching a movie at a theater in nations such as New Zealand, United States of America, France, Italy, Belgium, and some others may not be as expensive as the above ones but it is not cheap either. In these nations the average price of movie tickets was between US$ 6 and 9.

Malaysia, Mongolia, Iran, Ukraine, Cambodia and India are the best destinations for movie lovers as in these nations the average price of movie tickets is below US$3. Of these India, which is placed at the bottom position, is an ideal choice for those who love to watch movies on the big screens. The average movie ticket in the South Asian country stood at a mere US$ 0.78 in 2015.

The table below provides information on the average movie ticket price in each nation.