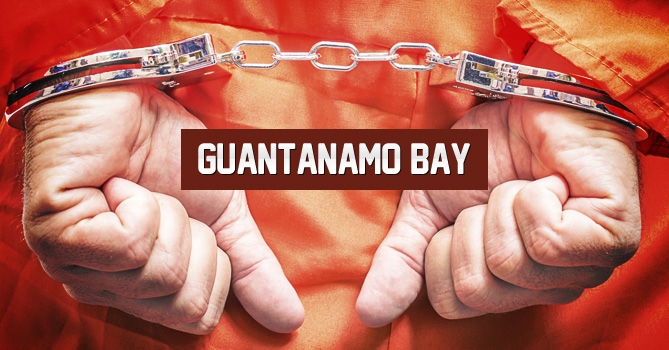 Guantanamo Bay – the name is enough to send shivers down the spine of even the most hardened terrorist who would otherwise not flinch while murdering thousands of people. The brutal torture techniques applied on detainees made it one of the most feared prisons in the world. But, now, after being in operation for around 14 years, there are calls from the Obama administration to shut down the prison and shift detainees to other camps.

The rather controversial Guantanamo Bay is located in Cuba. In 2002, the prison was built on a piece of land which was leased to the US in 1903 and reaffirmed in 1934 under the Cuban dictator Batista. However, the lease came with a condition that it could not be terminated without mutual consent. The fiercely anti-American Cuban President, Fidel Castro, would later call it “a knife stuck in the heart of Cuba’s dignity and sovereignty.”

Once used as a coaling station for U.S. Navy ships and a place where Haitian refuges fleeing the violent coup in their country were given refuge, in 2002, the land became a prison for those that the US suspected were involved in terrorist activity and being in close connection with militant outfits such as Al-Qaeda and the Taliban as a part of its War on Terror.

Since 2002, some 779 prisoners belonging to different countries have been held at the prison, but today there are around 91 prisoners. It has been reported that of these, 35 will be resettled in other countries, while 10 have been charged and are going through military commissions. These rest of the 46 prisoners are not to be released as the US considers them too dangerous.

Guantanamo Bay is mired in controversy because of the brutal torture methods applied on prisoners which would lead to any man going insane. As a prisoner testified that the interrogators videotaped him naked, hung him from a wooden pole, poured ice water on his genitals, held him in complete darkness in isolation and deprived him of sleep by using bright lights and ear shattering music. The conditions are so brutal and degrading that many human rights organizations such as Amnesty International, International Committee of Red Cross, Human Rights Watch and even the EU and OAS have repeatedly condemned it for gross human rights violations. However, the charge was vehemently denied by the Bush administration.

Upon taking up the presidency of the country in 2009, the new president of the United States ordered the facility at Guantánamo to be shut down within a year. Other than that, he ordered a review of the ways to transfer detainees to the U.S and interrogators to use only techniques that are found in the U.S. Army’s field manual on interrogation. But, Obama’s plans were foiled by Republicans and even some democrats who deemed the transfer of hardened criminals to US as too dangerous.

After seven years, in 2016, Obama has again called for the closure of the prison facility after delivering his plan to the Congress. Suggesting that the facility had become a dark spot on U.S. foreign policy, the President said the plan to shut the facility is about closing a chapter in our history.

Perhaps one of the biggest reasons for shutting down the facility is to cut down on the cost. The U.S. officials have been reported as saying that it would help the government save a whole lot of money (between $65 million to $85 million) in comparison to keeping prisoners at its Cuba facility.

Where to House the Prisoners?

The biggest question on the mind of both Obama and those opposed to the plan is where to shift the detainees currently housed at Guantánamo. As per US officials, some 13 potential sites would be identified in the U.S. to transfer the prisoners. Some of the options that are being considered in the United States include the federal Supermax prison in Florence, Colorado; the military prison in Leavenworth, Kansas; and the Naval Consolidated Brig in Charleston, South Carolina.

A Rough Ride for Obama

For Obama, getting the Congress to agree to his plan of shutting down the facility and relocating the prisoners is going to be one tough nut to crack. As was expected, the plan has once again been vehemently opposed by Republicans who are against shifting detainees to US soil.

Paul Ryan, Speaker of the House, said that “It (moving the prisoners to the US soil) is against the law – and it will stay against the law.” Chairman of the Armed Services Committee John McCain is also of the opinion that closing Guantanamo is not a “credible plan.”

In his Nevada caucus victory speech, Donald Trump has promised that if made President of the country he would reverse any closure of Guantanamo Bay and will “load it up with bad dudes”. Marco Rubio and many others have also voiced their disapproval.

Apart from the political challenges, there are also legal challenges that are making the situation tough for Obama. One of these is a legislation that the President had signed. It states that he will not allow detainees on U.S. soil. Now, to close the facility, Obama would require the support of the Congress, something that would be very hard for him to get. With less than a year left for Obama to relinquish office, the President would try hard to shut down the facility. However, those opposed to the plan would try hard to thwart it.