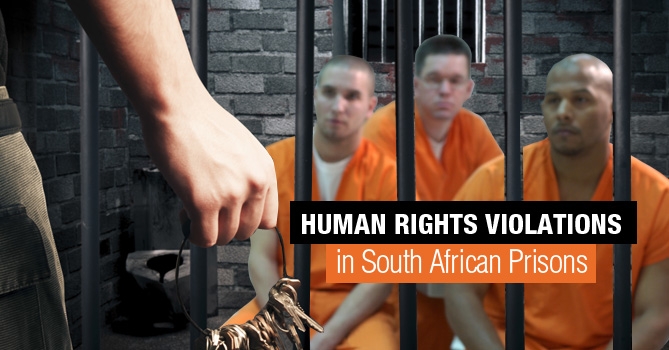 “It’s the truth of Oscar Wilde’s haunting line about the tent of Blue that prisoner’s call the sky”. Nelson Mandela quoted Oscar Wilde when he described the conditions at South Africa’s Pollsmoor prison. Officially known as the Pollsmoor Maximum Security Prison, it is where some of the most dangerous criminals are dumped. It is located in Tokai, a residential suburb of Cape Town. Opened in the early 1960s, Pollsmoor became known for one of its highly distinguished prisoner Nelson Mandela, who was brought here in 1982. Mandela had described the prison as the one ‘with a modern face, but a primitive heart.’ Notorious for the inhuman treatment of its inmates, a recent court case focusing on the prison has brought to light the shocking reality of the conditions faced by the prisoners.

Built with a capacity of about 4000, the prison remains one of the most overcrowded detention centers which, as per the recent estimates, houses about 7000 inmates. The appalling conditions inside the prison were described in greater detail by a reporter, who was recently granted an exclusive access to the prison. In his report, he suggested that the cells in the prison are at more than 300% overcapacity, with a single cell designed for 19 people, containing about 86 detainees who were forced to share a single toilet and one shower.

Due to chronic overcrowding, the living conditions at such prisons fall short of constitutional standards. The detainees are let outside only once a week for an hour. Skin diseases are an endemic problem and the likelihood of catching Tuberculosis remains very high. In September 2015, thousands of inmates had to be evacuated when an outbreak of leptospirosis struck. Two prisoners died from the rat-borne disease. The hospital unit has one doctor and a few nurses to attend to about 4,000 inmates.

After a “semi-urgent” application was sent to the Western Cape High Court by Sonke Gender Justice to ease overcrowding at the prison, the Correctional Services National Commissioner conceded that overcrowding at Pollsmoor may continue for some more time as the state could not find any immediate solutions.

The Gangs of Pollsmoor

The dismal living condition inside the 52-year-old prison is not the only problem. Some detainees during the trial have revealed other forms of abuse they are subjected to. Wardens giving electricity shock and meager amount of food are just two issues that have surfaced. The gangs inside Pollsmoor Prison control access to food, wardens, and even the brief chance to stand by the grille to breathe in fresh air.

It is also important to underline that most of the rapes are committed by prison gangs. The general of the gang called the 28s is the most powerful. The victim of the rape is treated as a female, and he is expected to clean the cell, cook for his violator and have sex with him whenever he wants. Since few victims report this crime, it becomes difficult to get a clear estimate on rapes inside the prison.

The horrifying conditions at Pollsmoor and overcrowding in most of the South African prisons reflect some deep-rooted flaws within the South African Judicial system. According to the report by McKenzie, most of the detainees at the Pollsmoor are undertrials, some even awaiting their trials for over two years. While they are stuck into the prison because of trial delays, the others do not have the money to afford a bail. Hence, legally, most of the inmates are assumed innocent.

According to an estimate, 100 prisoners were transferred away from Pollsmoor each month and on an average 500 awaiting-trial prisoners were admitted daily. Every weekday, the detainees are taken to courts in the neighboring towns, but the judicial system in the courts is in disarray. The court documents are frequently missing, the lawyers don’t show up, and the key evidence is misplaced, thus indicating a crisis in the country’s judicial mechanisms.

The JIOP’s annual report published in 2009 stated that the vast majority of the detainees in the prisons were arrested without an arrest warrant, on the basis of a reasonable suspicion or belief that they have committed an offense. In far too many cases, no comprehensive evidence is produced and prosecutors are compelled to withdraw charges after numerous postponements as a result of which the accused is detained for months, if not years.

Pollsmoor is a part of the apartheid-era prisons which were designed to break black prisoners instead of trying to rehabilitate them. After twenty years of achieving democracy, the country is still tainted by the continuing legacy of such prisons. Racism practised in the country today appears in much subtler forms. For instance, the general outcry over the rights of individuals is substantially muted when a black person appears to be the victim. There is, visibly, a general lack of empathy when a black person is involved. The prison community in South Africa remains largely closed and even after the post-apartheid desegregation of the prisons, incidents of racism in prisons continue, resulting in differential treatment for black and white prisoners.

Organizations such as the Sonke Gender Justice have taken it upon themselves to fight for the basic rights of detainees in these prisons. Their applications seek solutions for government’s failure to address the long-standing demand of improving the conditions of detainees, getting rid of poor ablution facilities, augmenting nutrition intake, and improving accommodation and health services. However, the larger questions of racism and appalling delays in giving justice still remain unaddressed.