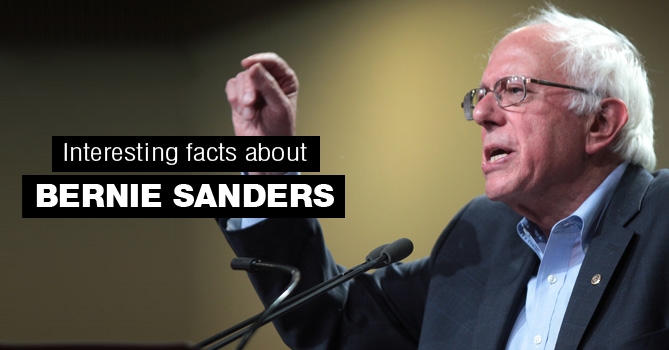 The race to the United States President’s post has become more interesting and probably a lot of Bernie Sander’s supporters would be looking forward to the Vermont Junior Senator making it to the White House. Sanders has, in the past few days, emerged as a serious contender. By now, a lot of people would be knowing quite a lot about him. But, if you are one of those who are still fumbling in ignorance or would like to know something more about this personality, then keep on reading.

One of the achievements – call it passion or stamina – was a marathon Senate speech that Bernie Sanders delivered in December 2010. In the speech, which lasted a whopping eight hours straight, Sander’s spoke against President Barack Obama’s proposed tax cut compromise.

Bernie Has a Brother Larry

Bernie Sanders has an older brother. What makes this fact so interesting is that Larry, just like Bernie, is also making waves, but in the United Kingdom. Larry Sanders was recently appointed as Green Party’s health spokesperson. Not to be confused with the American party of the same name, Green Party of England and Wales is a small political movement which has representation in local government in England and Wales. It also has a single member of parliament. Both brothers believe in the dictum – it is never too late in life.

For all of you who thought that Sanders was just another hardcore politician would be surprised to know that he had a musical side as well. Back in 1987, the rather young Sanders recorded his own Folk Music album. The album featured historical war protests songs such as We Shall Overcome, This Land Is Your Land, and quite a few others. But what makes the album interesting is the distinctive Brooklyn-Jewish New York accent in which the songs have been sung.

Will He be the First Jewish President?

On February 9, Bernie Sanders created history when he won the New Hampshire Primary. He became the first Jewish candidate in the history of the United States to win a presidential nominating contest. Will be able to repeat the feat on a much bigger stage? If he does win the US Presidential Elections, then he would be the first Jew to enter the White House as the President of the country. Till now, the United States never had a Jewish President, with Joe Lieberman being the last strong Jewish Presidential contender in 2004. Unfortunately, Lieberman dropped out being unsuccessful in winning a caucus, primary or even a single delegate. Bernie has already done it. Will he break another record? For that we would have to wait till November 8.

Bernie Sanders on an Israeli Kibbutz

Did you know that Bernie Sanders volunteered on an Israeli kibbutz (communal settlement)? The interview of Sanders, which was taken by a Haaretz writer Yossi Melman in 1990, gave an insight into the Senator’s time as a kibbutz volunteer. Though Sanders had said that he had at one point of time spent time on a kibbutz in Israel but he never revealed the location. The interview has all the answers to your questions. Here, Sanders tells Yossi Melman that he had spent many months in Kibbutz Sha’ar Ha’amakim, in northern Israel, in the year 1963. He was there as a guest of the Hashomer Hatzair youth movement.

Long Time at the Congress

Bernie Sanders’s list of achievements just doesn’t seem to end. Here comes one more. The Vermont Senator is the longest-serving independent member of the United States Congress in the history of the country. Before being elected to the Senate in 2006, the Brooklyn-born Bernie Sanders has served for 16 years as Vermont’s only Congressman.

There is a Bernie Sanders Video Game!

If you thought we are joking, then check this out. There is actually a Bernie Sanders video game titled – Bernie Arcade. The game, in which Bernie Sanders was himself the star, was featured on the Vermont Senator’s 2006 re-election campaign. In this game, the player pilots a Sander’s character who is flying a plane against a series of enemies such as mudslingers, bags of flying money, fat cats, and many other frightening obstacles. There is much more to this interesting game. Check out the rest for yourself.