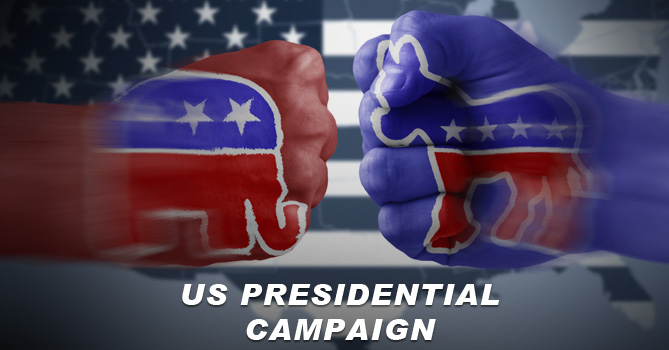 With the sharpening of debates among contestants for US presidential nominations, American media has begun to give more focus on domestic political issues than the usual blood-drenched developments of Syria, Israel-Palestine conflict and Taliban’s heightened attacks in Afghanistan. Republican versus Democrat fight over economic, health and foreign policies is tightening. A few days back former Secretary of State and key Democratic candidate in the race for presidential nomination Hilary Clinton avoided a major damage to her campaign when during a Republican-dominated Congressional hearing she was grilled for nearly 11-hours over Benghazi attacks, use of a private email account while in office and others. In her subsequent debate over television, she was able to outsmart her rivals from within the Democratic Party. Now with Vice President Joe Bidden who at one time appeared major threat to Clinton’s chances, withdrawing from the race and former Rhode Island Governor Lincoln Chafee ending his bid for the presidential nomination, she has become darling of Democrats.

In contrast, Republicans are still swamped by many slip-ups and irreverent attacks by candidates in the race for presidential nomination. Donald Trump, the billionaire real estate developer in his usual no-holds barred approach attacked  former US President George W Bush for the 9/11 attacks on America. He said irrefutable evidence that exists suggested that the former President and his national security team were repeatedly warned about the impending attacks, yet they failed to stop the US from being the target of that horrible terrorist onslaught. Patting his back, Donald Trump said that had he been the president he could have prevented terror attacks on his country. But Donald’s such claim met with strong rebuttal from Jeb Bush, younger brother of George W Bush. While painting his Republican rival as a non-serious candidate, the former Florida Governor said Donald Trump was unfit for the foreign policy decisions. Such barb and biting comments between two strong rivals from the Republican camp have provided American media enough opportunity to highlight deepening frustration in the Jeb Bush camp.

Junior Bush who has now downsized his campaign to fit struggle in the polls, recently told CNN’s Jake Tapper that “if America wants to elect Trump, go right ahead. Jeb Bush has better things to do than sit around and be demonized.”  He further added that “if this election is about how we’re going to fight to get nothing done, then I don’t want anything. I don’t want any part of it. I don’t want to be elected president to sit around and see gridlock just become so dominant that people literally are in decline in their lives. That is not my motivation…Elect Trump if you want that.” In any way, Trump’s brash mannerism is helping him in earning more and more supporters. According to a recent poll conducted by Associated Press-GfK, seven in 10 Republican and Republican-leaning registered voters say Trump could win the November 2016 presidential election if he gets nominated.  In comparison, out of 10 people six say the same about the Democratic Party’s Ben Carson, who, like Trump, has flagged the powerful wave of anti-establishment anger that defines the early phases of the presidential contest.

Thanks to divisive rhetoric used by Carson and Trump, they are hitting the popularity chart in the U.S. Trump called Mexican immigrants rapists and criminals during his recent speech, while Carson said he would not support a Muslim presidential candidate. In comparison, both Jeb Bush and Hillary Clinton appear to be laggard in primary poll. As per Associated Press-Gfk, six in 10 Republicans say Bush could win the general election and 5 in 10 Democrats say Hillary could win the presidential election. But then YouGov/CBS News has a different take altogether. While it shows Hillary Clinton taking a narrow lead over her Democrat rival Bernie Sanders in Iowa, a bit good lead over him in New Hampshire. In the Republican camp, retired neurosurgeon Ben Carson has caught up with Donald Trump in Iowa, but continues to lag far behind him in New Hampshire and South Carolina. Nonetheless, in the cut-throat campaign for presidential nomination, only the fittest will survive and this is what the on-going primary polls suggest.