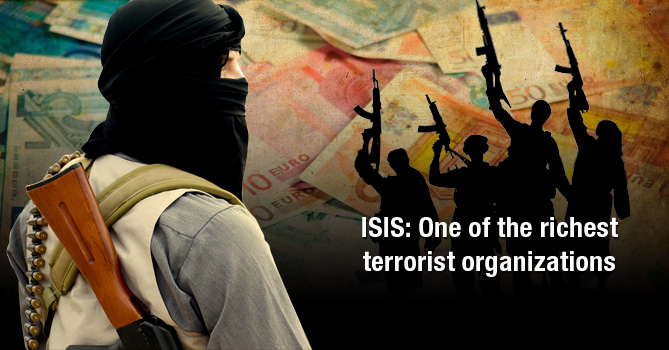 The jihadist militant group called the Islamic State in Iraq and Syria (ISIS), also sometimes referred to as the Islamic State (IS), has emerged as the biggest terrorist threat faced by the world in recent times. In April 2015, the BBC called it the World’s Richest Terror Army. The net worth of this militant organization was pegged at about USD 2 billion that month. ISIS has been able to amass such a vast amount of resources and finances due to meticulous planning and superb organizational management, experts believe. How did this illegal terrorist outfit become the richest of its kind?

The Islamic State earns about USD 3 million in a single day. Most of this wealth comes from controlling oil wells and through oil trade. Apart from this, the group earns a neat amount of finances through mafia-like activities such as smuggling, kidnapping, extortion, human trafficking and slavery, and looting financial institutions.

The biggest source of funds to power the ISIS comes from the group’s control over the oil fields in eastern Syria and elsewhere in its regime. Selling oil from these captured oil wells is a major source of income. While international sanctions are in place, there are more than enough buyers in the black market. More so since the oil coming from ISIS wells is sold at a discount of USD 25 to USD 60 per barrel in comparison to the international oil market. The oil fields captured by the ISIS produce enough oil to fetch the organization over USD 2 million a day. Early reports said that the group owned a number of oil fields in Hasakah and the Euphrates Valley. Refineries that produce diesel and petrol too were taken over by ISIS militants. This is now the backbone of the group’s financial inflow.

Spoils of the War

ISIS is believed to have amassed a large amount of wealth by looting the banks and financial institutions in cities under its control. Even as the group continues to spread its base and newer towns fall to its jihadist army, the spoils of war are collected from the banks and from rich households apart from commercial centers. In June 2014, ISIS terror army was reported to have raided the Central Bank of Mosul and collected wealth amounting to over 500 billion Iraqi Dinars (approximately USD 429 million) in currency and gold. These are merely official reports and unofficial sources say that the spoils from the central bank may be much more. With this looting the ISIS became richer than a number of small countries and nations states of the world.

One of the biggest expenses borne by the ISIS is towards ammunition, war equipment, vehicles, and gunnery. By securing victories in towns such as Fallujah (May 2015), the ISIS has now seized huge quantities of ammunition, guns, mines and explosives, and military vehicles – making the group that much richer. Most of these supplies were donated by the U.S. military that has been supporting the war against ISIS.

One of the key sources of income for the ISIS is extortion and ransom from kidnapping. News reports say that Iraqi intelligence suspects the IS to make about USD 1 million a month only from extortion in the city of Mosul. The levies, or taxes as they are called, are imposed on all businesses. Transport and real estate business owners cough up huge amounts on demand, news reports suggest.

Another source of income for the ISIS is through the sale of antiques and historic artifacts from the museums and ancient temples in the regions under its control. Most of these are smuggled out to other Middle Eastern countries or to Turkey and sold to private collectors. News reports have said that the ISIS has smuggled out about USD 36 million worth artifacts (some about 8000 years old) from al-Nabuk, near Damascus.

Ransom from kidnappings also is a significant source of income, news reports suggest. In this matter, though, there is lack of concrete evidence but it seems that the ISIS is given to kidnapping French and Spanish nationals and demanding multi-million dollar ransoms from the governments. Though unreported, these governments are believed to have paid the amount. Similarly wealthy Arabs are believed to have been kidnapped for ransom. None of these parties have reported any of these activities, though.

In the early days of its inception, the ISIS depended heavily on private funding from rich individuals from Gulf countries and also from Islamic charities sympathetic to the Jihadist cause. It is also believed that the jihadists and ISIS followers have infiltrated the social security systems of many European nations thus manipulating government and NGO funds towards their cause. It is suspected that many wealthy Sunni Arabs from the Middle Eastern nations still remain private funders for the organization.

It is suspected that the highest private funding received by the ISIS may come from Qatar, Kuwait, and Saudi Arabia. These countries may be privately funding a proxy way in the region – particularly on neighboring countries such as Tunisia.

According to recent reports, human trafficking seems to be a significant source of income for the ISIS. The group sells women and children as sex slaves. Since the emergence of the ISIS, about 10,000 women and even young girls have been abducted and trafficked, claim human rights groups. Many of them are offered as rewards (sex slaves) to the fighters or sold into prostitution and slavery for money. Most of the women captured are from the Yazidi minority groups. The ISIS earns between USD 200 and 20000 for each of the woman sold. Most of them are trafficked into the United Arab Emirates, Jordan, or Syria.

Who Manages the Finances?

The financial resources of the ISIS are, surprisingly, very well managed, say experts. Abu Salah, (real name – Muafaq Mustafa Mohammed al-Karmoush) is believed to be the financial brain behind the organization’s workings, especially in Iraq. The jihadists and soldiers of the ISIS terror army seem to be very well compensated. Each month the senior and medium level commanders are believed to receive salaries between USD 300 and USD 2000. Suicide bombers are compensated for their lives and their families are well cared for.

The key to winning the war against the ISIS may lie with breaking their financial backbone. It is a difficult task requiring a multi-pronged approach and international cooperation of the highest order.