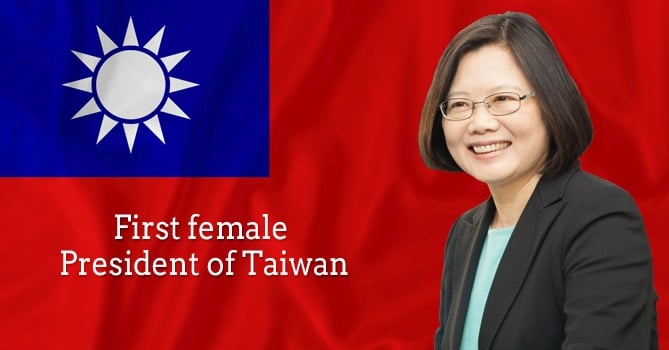 In the 67-year-old political history of Taiwan, male has dominated the power structure of the country. However, for the first time, male dominance has been demolished and that too comprehensively when voters elected Democratic Progressive Party (DPP) leader Tsai Ing-wen, a former lawyer and professor as their President. In fact, Tsai’s election as the first female head of Taiwan has marked a generational shift in the Chinese-majority nation where democracy rules the roost in contrast to mainland China which is ideologically moored to Communism. Her thrust on good governance, responsiveness towards popular demands, boosting economy by promoting innovation and pledge to protect Taiwan’s sovereignty won her massive support from the electorate.

The 59-year-old Tsai garnered nearly 6.9 million votes, compared to 3.8 million by her rival and Kuomintang party’s nominee Eric Chu. This landslide victory for the tough-talking politician who was once described by Ma Ying-jeou, Kuomintang party leader and ex-President of the country, as “Taiwan independence extremist”, has apparently rattled China. Moreover, she rubbed China the wrong way when she in her election victory statement maintained that her country’s democratic system, national identity and international space must be respected and that any form of suppression would damage ties with the mainland. Responding to the President elect’s statement China’s Taiwan Affairs Office warned that Beijing would resolutely oppose any form of secessionist activities seeking ‘Taiwan’s independence.’ Chinese state news agency Xinhua in a strongly-worded editorial said that her victory would “pose grave challenges to cross-Strait relations.”

Though split with China in the aftermath of bloody civil war in 1949, Taiwan has never declared independence. As a result, Beijing still sees it as part of its territory even as relations between mainland China and Taiwan have been characterized by tensions and instability. Since 2008, diplomatic ties between the two sides somewhat improved. Attempts were made to restore transportation, commerce and communication linkages between the two sides, cut off since Mao Zedong established Communist rule in China in 1949. Party-to-party contact between the Kuomintang party (KMT) and Communist Party of China (CPC) was restored and often NGOs of the two countries also met. All this happened under the leadership of Ma Ying-jeou.

On November 8, 2015, the Taiwanese President and Chinese President Xi Jinping for the first time in the more than six decades shook hands and waved together to the media in Singapore. In 2014, the two-way trade exceeded $198 billion. Warming of ties between the two sides also led to increase in investments. Till 2014, total Chinese investment in Taiwan was around $1.24 billion. China Mobile is a major spender in the Taiwanese market with its total investment going up to around $529 million. But the two-way trade is leaned more favorably towards China than Taiwan. This has generated discontent among islanders. Two years back, hundreds of students had surrounded the Taiwanese parliament in the largest show of anti-Chinese sentiment and demanded more transparency in trade pacts with Beijing.

Now that Taiwan has elected a new President, China sees its worries increasing. Her categorical stand on maintaining status quo in relationship with Beijing appears unconvincing to the Chinese leadership. Two decades ago, Tsai Ing-wen had co-authored a “two-state” doctrine. This still haunts China as it looks at the DPP leader as a slippery slope in Beijing’s unification bid. Her stand on ‘the 1992 consensus’ that favors one China principal, is also vague. Post her presidential victory when media persons asked her whether she would accept the 1992 consensus, she gave cryptic response: “It is as option, but not the only option.” What surprises diplomats and strategic experts alike is that she chose to make such response despite Beijing’s threat of “earth-shaking consequences” if the principle of one China is not adhered to. As if it were not sufficient, a large banner outside DPP headquarters in Taipei declares: “Taiwan is not part of China! Support Taiwan’s Independence.”

It is said that the DPP leader’s stand on ties with mainland China is what encouraged majority of Taiwanese, growing wary of Beijing’s aggressive posturing, to cast their ballots in Tsai Ing-wen’s support. America and Japan have congratulated the DPP leader for winning presidential election. Both are known for their vocal opposition to China’s growing assertiveness in South China Sea and East China Sea. In Tsai Ing-wen’s victory, they might see a chance to prick China where it pains. But they should know that their interference in Taiwan’s affairs would be counter-productive and would hurt Taipei’s interest especially when the Southeast Asian nation will have to work hard to bring its economy back on the rail. China is the island nation’s biggest export market. In that view, both Taiwan and China have to do their basics correct and have to find mutually acceptable way to interact with each other. Both have to ensure that no provocative statements are made to the detriment of each other’s geographical interests.