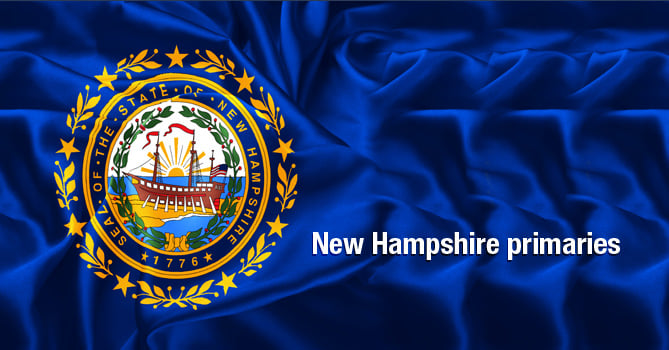 The US presidential polls have always been a highly watched affair. However, the way New Hampshire primary election results have gone in support of preferred candidates from either Republican or Democrat side, there is little to doubt as to what shape this year’s presidential race will take. While Republicans gave thumping support to Donald Trump, the impetuous billionaire who has never run for office before, Democrats voted for Bernie Sanders, a self-declared socialist, in the first primary election. He left far behind his Democrat rival Hillary Clinton in the contest, which saw large participation of youth, preferring non-professionals over seasoned politicians for the top American executive post. In that way while Sanders got near 60 per cent of electorates’ vote, his rival and former dynamic Secretary of State Hillary Clinton got only 38.5 per cent voters’ support. In the Republican camp, by winning 34.5 per cent vote Donald Trump has shown that why he is going to be the most preferred candidate to win the presidential nomination. Instead of Ted Cruz who gave Donald Trump a stunning setback in Iowa caucus, it was John Kasich who has emerged as Trump’s Republican rival in New Hampshire primary election. Kasich won 16.4 per cent while Ted Cruz remained on the third place with just 11.5 per cent vote.

Nonetheless, complexity rules the roost of the American presidential election process. Before being nominated by a party for the presidential contest, a candidate has to pass litmus test by wining supports in primary elections or caucuses. Surprisingly, they were never part of the American constitution. Rather they were created over time by the political parties in the country. Of the total 50 states in the US, 34 hold primary elections and 16 conduct caucus. Through primary elections even undeclared or unregistered party members vote to select a candidate affiliated with their party, while caucus, the oldest method of choosing delegates in the US and with its root lying in the British colonies, enables only registered members of a political party in a city, town or county gather to vote for their preferred party candidate. But caucuses sometimes become unpredictable as a voter registering himself or herself as a party member in the day can switch his or her loyalty at night, thereby, altering the character of the selection process. However, along with narrowing down the crowd, primaries and caucus also help candidates earn delegates who in turn vote for them at party conventions to be held in July.

Traditionally, Iowa, the 30th most populous state of the US and lying in the Midwestern part of the country, happens to be first state to hold caucus, New Hampshire which lies in the northeastern part of America happens to be the first state to hold primary election. As per media reports, Iowa where caucus was conducted on February 1, former Secretary of State Hillary Clinton claimed a narrow win over her Democratic party rival Bernie Sanders. But it is in Republican camp, Iowa caucus result has changed the way the 2016 presidential election is set to play out. Republican frontrunner and billionaire reality tycoon Donald Trump suffered a drubbing vis-à-vis his closest rival Ted Cruz in Iowa.

Given this, all eyes were focused on New Hampshire where election was organized not by the political parties, but by the state. Both Republicans and Democrats made up equal number of electorate-30 per cent each, while unaffiliated voters who are classified as independents made up 43 per cent of the total electorate in the state where as many as 307 polling stations were set up this time around. Dixville Notch-one of districts of the northeastern state kept the tradition of midnight voting alive. Residents of Dixville Notch have been casting their ballots in primary election at midnight since 1960. This year two more New Hampshire districts- Millsfield and Hart’s Location joined the midnight voting club, although only a few voters turned up at poll centers to cast their ballots. Nonetheless, it was fight been two Democrat stalwarts in New Hampshire-Hillary Clinton and Bernie Sanders which turned the presidential nomination race quite interesting. While enjoying a hometown advantage in New Hampshire, which actually neighbors his home state of Vermont, Sanders did not allow his closest rival Hillary Clinton to spoil his party in this state-controlled election. On the Republican side, businessman Donald Trump got a significant lead in New Hampshire despite his failure to snatch victory from Ted Cruz in the Iowa Caucus. But then results of Iowa and Hampshire are not final.  They have only set the momentum to the presidential nomination process which will culminate into conventions. Yet journey towards official declaration of candidates for the presidential race begins only after seal of approval is made at party conventions. Thereby, the process is long and arduous. Apart from each candidate pumping in millions of dollar, has to work hard and it starts, in most of cases, from the day the new president is sworn in America.