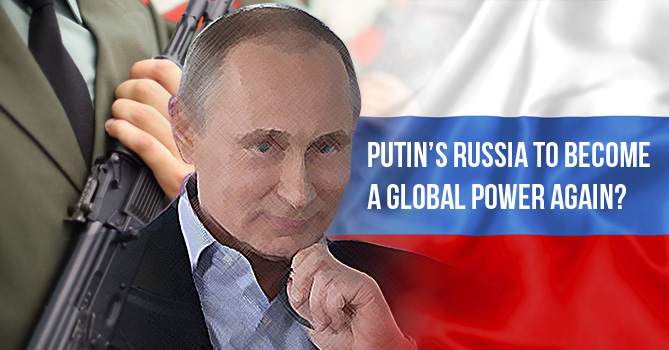 That’s a question being asked by the international community and by many within Russia. Russians are proud of their cultural heritage and many still look back nostalgically to the heydays of peak military power the nation enjoyed when it was the USSR.

After collapse of the communist regime and the subsequent break-up of erstwhile USSR, Russia suffered wide social and political unrest with the economy entering near chaos. Corruption was riding high, street violence spreading, and with inflation at an all-time high, under those challenging circumstances, Boris Yeltsin came to power as Russia’s first elected President on 12 June 1991, winning 57% votes in his favor. The nation looked up to his leadership to establish stability and kick start the economy. He failed.

Yeltsin remained in office from July 1991 to December 1999 but failed to establish social order or revive the economy. From being a leader with a popular mandate, his ratings fell to less than 2% by 1999.

With Yeltsin stepping down in December 1999, Vladimir Vladimirovich Putin, the then Prime Minister, took office as acting President. He won the Presidential elections in March 2000, garnering 53% votes in his favor. President Putin is now serving his third term as President and enjoys high ratings within Russia.

Therefore, it comes as no surprise that Putin continues to enjoy high ratings at home and with nationalism riding high with his decision to annex Crimea and put pressure on Ukraine.

His decision to annex Crimea, ostensibly to protect Russian Naval access to the Black Sea and his incursion into parts of Ukraine has drawn sharp reaction from EU and the United States, inviting sanctions.

Putin’s vision of a new Russia

President Putin is clear that he would like to see Russia re-assert itself diplomatically and economically in the international community and is willing to modernize his defense forces to back that assertion. From his early days of wanting to come closer to the EU, Putin has now leaned closer towards China, as a reaction to western sanctions.

Russia has lost its influence in the Middle East after the break-up of former USSR, and now Putin wants to regain some of that lost influence. His overt support for the Assad regime and his decision to get directly involved in the Syrian conflict is part of his overall strategy in the Middle East.

It was Russian intervention with Iran that helped resolve the nuclear talks deadlock between Iran and the international community. And with Iran’s support, Russia is trying to cement the Assad regime as a counter influence to Sunni backed militant groups in the region.

Russia’s discovery of large reserves of oil and gas has fueled its economic revival and it has used this new found wealth to fund the much needed modernization of Russian defense forces.

Russia, which has a long history of political rivalry with China, has now negotiated a long-term deal to supply oil and gas to China worth $400 billion. This development, along with stronger ties through transcontinental railway network extending from China and running through Russia into Europe, is another example of Russia’s emerging vision as a geo-strategic player. Although low global prices for crude oil have depressed the Russian economy, Putin plans to continue its pro-active role in international diplomacy.

Post-USSR, the Russian forces have been saddled with obsolete soviet-era weaponry that has not kept pace with modernization that US-led NATO, along with a resurgent China, has been undertaking.

President Putin is clear that he wants a lean and mean Russian force that is capable of supporting his aggressive international agenda. Russia is developing the Sukhoi PAK-FA Fifth Generation Fighter to counter the American F-35 Stealth fighter. Russia is also developing a range of modern weaponry across all theatres of war and wants to get back into the arms market as a major exporter.

It has been expanding its military relations with China in a look-east policy as a counter to NATO expansion on its western borders.

Can Russia succeed in its new role?

A lot of that will depend on how President Putin reaches out to the global community. He had been a vocal critic of the U.S. move against Saddam Hussain, along with France and Germany, and today’s chaos seen in Iraq and its subsequent impact in Syria and other countries in the region, has given Putin’s position some justification.

Post-Paris attacks, Russia has moved closer to both France and Germany and is now playing a major role in brokering a settlement in the Syrian crisis. If a political settlement is finally reached, both he and Russia will have announced their return to the centre stage of international geo-politics.