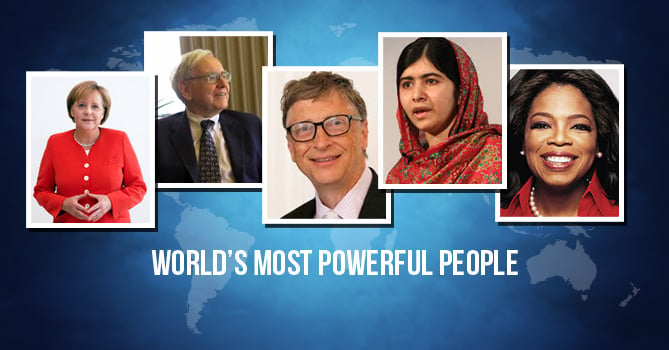 Powerful people are not always heads of state. People who are high achievers and influencers around the world define power as change makers. Here are some of the most powerful people in the world.

From a college drop-out to being the world’s richest man, Bill Gates stands out an icon for business and philanthropy.

Co-founding Microsoft, along with friend and colleague Paul Allen, Bill Gates successfully identified a need within the nascent computer industry and built an operating system that has been the backbone for the personal computing space for well over three decades.

Besides being a powerful voice for his industry, Gates has emerged as a leading philanthropist who along with his wife, has co-founded the Bill and Melinda Gates Foundation, which is funding valuable research in global problem areas like HIV and other infectious diseases, clean drinking water, immunization, agriculture and poverty eradication. His net worth stands at $87.3 billion while his foundation has donated over $34.5 billion. He continues to remain in the forefront of business and philanthropy.

When Janet Yellen took office as Chair of the Board of Governors of the Federal Reserve on February 3, 2014, she became the first woman to be appointed to the Chair. Having served as Vice Chair since 2010, Yellen has been familiar with the challenging task of implementing federal policies that guide the US economy, which also impacts global policy response.

Ever since taking over as Head of the Federal Reserve, the domestic and international business community has closely followed her every word and action and remain apprehensive over the timing and scale of the anticipated hike in interest rates.

For the last decade, the German Chancellor has been a powerful voice and influencer of policies for both Germany and the European Union. The last five years have perhaps been her most challenging ones where she has had to contend with economic, political and social crisis that the European Union member states have been facing. Her leadership has ensured Germany continued to deliver a strong economy while her role in international diplomacy continues to keep Germany in the forefront of emerging geo-politics.

The CEO of Berkshire Hathaway is worth $65 billion. He created his wealth taking long-term investment bets on companies whose stock value has risen exponentially over time. Buffet has donated over $21.5 billion to charity and remains committed to Giving Pledge, wherein global billionaires have pledged to give away 50% of their wealth to charitable causes.

Warren Buffet continues to be an inspiration and role model for every investor and businessman for his visionary approach to long-term investing.

Oprah Winfrey is best known for her talk show ‘The Oprah Winfrey Show’ and is widely watched by a dedicated fan base stretching across continents. Her show covering a variety of celebrity guests, role models and their inspirational real-life experiences, have inspired millions of viewers.
Over the years, she has also built a book club, gift guide and a weight watcher group that has only added to her already extensive fan base. With a net worth of $3 billion, the first African-American woman billionaire continues to stand up as a role model to women around the world.

The serial investor that he is, Elon Musk has been driven by innovation and search for solution to existing problems. He heads two of America’s most path breaking technology companies – Tesla and SpaceX.

Tesla is leading the drive in developing stored electric transport solutions, with several electric cars initially hitting the roads as technology demonstrators and subsequently, as practical cars for personal use. His Tesla Model X crossover vehicle has already been well received, while his Model 3 Sedan is expected to be launched in 2016.

SpaceX, a private space exploration company, built its first multi-use rocket system Falcon 9 but failed in its first launch. Another launch is due on 19 December this year. Having built a net worth of $11 billion, Musk continues to invest in path breaking ventures. He recently donated $10 million to the futuristic technology research organization Future of Life Institution and remains an important voice for innovative research.

Malala Yousafzai has emerged as the most inspirational voice for education rights for girls across the world. At 14, she received death threats from the Taliban for speaking up for the right to education for girls. She carried on regardless, only to be shot in the head by a lone gunman who boarded the bus when she was on her way home from school. The shooting left her critically injured, while two of her schoolmates received injuries. She was airlifted to the UK where she made a remarkable recovery.

Not to be cowed down, she once again took to the pen to raise her voice for girls across the world to be given their due right to education. Today Malala stands up as a true inspiration and role model for girls all over the world and continues to deliver guest lectures in promoting her cause.

Born on February 24, 1977, Floyd Mayweather is without doubt the most successful fighter in boxing history, winning championships across five weight categories. His recent fight with Manny Pacquiao was globally followed, generating record television viewership and earnings. Though his personal life has often been controversial, as a professional fighter, he continues to be a role model for young boxers worldwide.

British singer Adele burst on the international music scene winning Best New Artist of the Year award in 2009 and she hasn’t looked back since. With super hits like ‘Someone like you’, ‘Rolling in the Deep’, ‘Set Fire to the Rain’ and ‘Skyfall’, Adele has emerged as a universal pop star. She also won an Oscar for songwriting for the James Bond film ‘Skyfall’. Motherhood briefly kept her away from signing and performing for some time, but she returned this year with another smash hit ‘Hello’. Her album ‘25’ sold a record 3.38 million copies in the first seven days of release. Adele continues to stand out as a leading performer and entertainer.