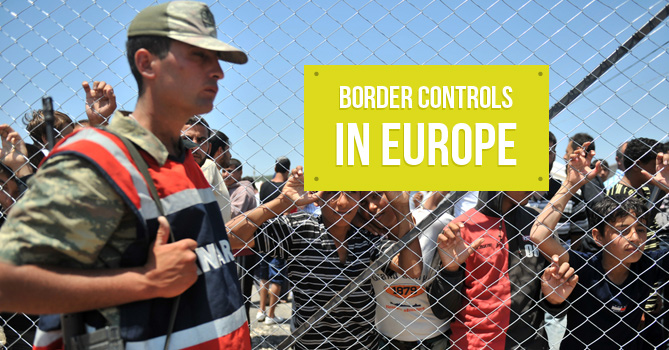 Some 283,000 people crossed borders illegally to enter Europe in 2014. The figure touched an unprecedented 1.8 million in 2015. With huge infiltration of refugees in the last year, the entire Europe now finds itself on horns of a dilemma. While people can sense the end of passport-free travel in Europe, they can also foresee a collateral damage.  As the EU ministers are almost on the verge of suspending the Schengen Agreement for two years in order to tackle the refugee crisis, there are some pressing concerns that deserve our attention.

What is the Schengen Agreement?

The Schengen Agreement, which was signed on 14 June 1985 by five out of 10 member states of the then European Economic  Community, had proposed abolition of border checks at the signatories’ common borders. The idea came into effect 10 years later in 1995 when the Schengen Area was created. Freedom of movement across countries was the main principle that drove the idea home.  The 26-nation Schengen Area doesn’t include the UK.  Recently, some of the members, including Germany, reinstated temporary border checks to foil the attempts of migrants to reach the EU member states.

Arguments Against Rolling Back of Schengen Agreement

Some countries may have closed their borders, built fences, and “crawled away into their national nutshell” but can tighter border controls solve the issue of illegal migration? There’s no easy answer to it. However, what’s very much predictable is an adverse impact on people’s movement and free movement of goods and services.

Rolling back the Schengen Agreement, “a centrepiece of European integration”, will directly harm the idea of interconnectedness within Europe. Experts are of the opinion that reintroducing stricter border controls will have an impact on mobility of labour and foreign investment.

According to a research initiated by the French Government, border controls and passport checks are likely to cost Europe up to €100bn ($109 billion) in next 10 years. In fact, France alone will have to incur a short-term cost of €1 – €2 billion and €10 billion within a span of 10 years.  The same research suggests that the return of border checks in the Schengen passport-free travel zone is likely to reduce GDP by 0.8% because that would result in drop in cross-border tourism.  France Stratégie, a French Government agency, is of the opinion that trade between countries in the Schengen area could see a drop by 10 to 20 per cent.

Some nations have already pressed the panic button as they see a surge in influx of people. Hungary is desperate to shut its borders with northern Greece and Macedonia is reportedly building “a second row of barbed wire and metal fencing.” Sweden introduced temporary border controls on 12 November within the Schengen free-travel zone to curb migration and extended the controls until 9 March. The Netherlands, one of the latest countries to tighten their border controls, deployed mobile guard units along roadways and rail lines. While more countries continue to tighten their respective border controls, Greece and Turkey reject EU’s demands for strengthening their border controls to stop refugees and illegal migrants from entering Europe.

What’s the Way Out?

Crisis can do two things: it can either destroy individual freedom and national integration or create an opportunity for deepened integration. The latter is much more desirable. A similar school of thought has emerged wherein experts believe that deterring migrants with border fences and teargas will not ebb the flow of people into Europe. On the contrary, they propose more secured external borders of Europe.

On this note, a suggestion has emerged wherein efforts need to be directed towards investing in a common European external border management. Similarly, a common European asylum system has been proposed “in the spirit of European solidarity.”  According to a thin-tank, European leaders should ensure that the journey of the migrants is safer.  The Overseas Development Institute (ODI) shares the same sentiment.  The ODI recommends a foolproof strategy to reduce migrant deaths in the Mediterranean.