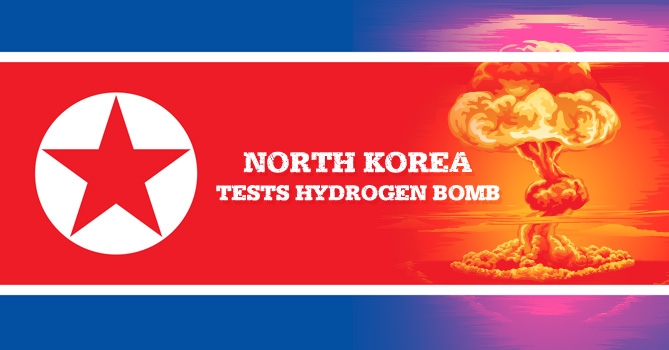 North Korea has moved a step forward in increasing its military might by conducting a nuclear weapons testing at the Punggye-ri Test Site. Though there is as yet no conclusive proof of the testing but what gave rise to the suspicion was a 5.1 magnitude “seismic event” that occurred on Tuesday near the country’s nuclear testing site. Moments later the government of North Korea claimed that the country had tested a hydrogen bomb.

What is a hydrogen bomb?

A hydrogen bomb, which is also known as a thermo-nuclear bomb, is much more powerful than an atomic one. However, as it has less radioactive fallout, it is considered to be a cleaner bomb. The weapon was first developed in the United States in 1958 and is energized by the nuclear fusion of isotopes in a chain reaction. The hydrogen bombs can be easily fitted in warheads of ballistic missiles as they can be just a few feet long.

How will it help North Korea?

North Korea is a heavily militarized state and even though the 1950-53 conflict ended in an armistice, the peninsula is technically at war. The internationally isolated regime has a massive standing army which includes 1.2 million active soldiers and 7.7 million reservists. But the biggest drawback that the country is facing is weaponry that is outdated and has limited effectiveness. To tide over the crisis and give its military the edge which would enable it to stand up to superior military powers in the world, especially its neighbor and foe South Korea, North Korea has resorted to developing nuclear weapons. The first nuclear test was conducted on October 9, 2006, followed by another on May 25, 2009 and the third one on February 12, 2013. The fourth test, which is a hydrogen bomb, would see a significant leap in North Korea’s military capabilities. Though the North Korean state news agency issued a statement saying that they would not use the nuclear weapon unless there is invasion into their sovereignty, but the country has said that the bomb would provide it with a weapon to defend itself against the United States and other enemies. But negative fallout for North Korea would be a push for stronger and tougher sanctions on the country.

Reaction of South Korea, US and Japan

The latest developments have set alarm bells ringing and would increase tensions between North Korea and its neighbors. Japan has come down heavily on the North Korea nuclear testing. Calling the country’s latest nuclear test a threat to the security of Japan, the Japanese Prime Minister has said that they would make a firm response to North Korea’s challenge against nuclear non-proliferation.

The White House has not been able to confirm North Korea’s claims; however, it has released a statement condemning any violation of UNSC Resolutions and has called upon North Korea to abide by international obligations and commitments. The US is definitely worried as according to some reports, the latest development can see North Korea’s scientists achieving their goal of developing a small bomb that can be fitted on a missile having the capability to reach the US. However, some analysts are of the view that North Korea has not yet achieved that capability. However, it has led to speculations as to how far the North Koreans have advanced.

Taking stock of the situation, South Korea’s defense ministry said that following the nuclear test, the country’s armed forces are increasing their monitoring of North Korea. South Korea is an ally of the US, which continues to deploy more than 28,000 in the country to combat any North Korean aggression.