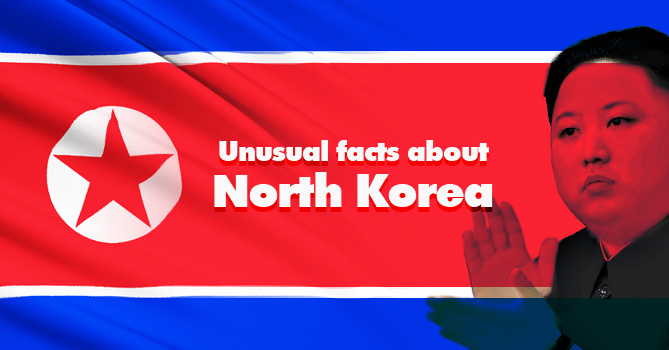 Democratic People’s Republic of Korea, better known as North Korea is certainly an enigma. Having distanced itself from the rest of the world and having idolized its leaders as living god did not help. As the curiosity of the world increased, rumors from North Korea became more implausible and outrageous. Here are 10 weird facts from North Korea that may surprise you.

The theory of divine origin was frequently used by kings of ancient times to justify their right over the throne. Former North Korean President Kim Jong-il, however, took personal propaganda down this path. According to North Korea’s official records, his birth was a divine one. Prophesized by a swallow, Kim Jong-il’s birth in the country’s sacred mountain, Mount Paekdu, was accompanied by the birth of a bright new star in the sky. A double rainbow is said to have appeared at the instant and the season changed from winter to spring. Soviet records, however, show his birth to have taken place in the Siberian village of Vyatskoye under far less dramatic circumstances.

If you thought labor camps were synonymous with the Holocaust, think again. North Korea’s political prisons/labor camps are designed to outdo the worst nightmares of defectors. It is believed that North Korea operates some 16 labor camps with total inmate strength of approximately 200,000. Forced labor, inhuman conditions, brutal torture, and nonexistence of human rights are the key highlights of these camps, say some of the few people who have managed to get out alive. Most of the inmates include political dissenters (anyone who may be considered a threat to the oppressive dictatorship) and those whom the government considers traitors.

Very few countries of the world retain the death penalty. Even in cases when a person is sentenced to execution in these countries (punishment reserved for crimes of extreme violence and brutality), the state attempts to execute using humane methods. The lethal injection and hanging are the common methods. The firing squad, though a matter of the past, is not inconceivable. North Korea, however, believes in execution by flamethrower. This removes traces of the person sentenced to execution, usually because he has had a fall out with the government and has been decreed a “traitor” or “defector”.

No country across the globe, at least no contemporary country, is mired in as many rumors and untruths as North Korea. Political and media isolation is a major reason people across the world are ready to believe any outlandish truth about the country and its oppressive dictatorship. Back in 2013, Kim Jong-Un executed his uncle and second-in-command Jang Song-thaek after having dubbed him “an anti-party, counter-revolutionary factional element” and “despicable human scum”. Purging of high level officials is by no means out of ordinary in North Korea and Jang was probably executed by flamethrower. Global media houses, however, reported that Kim had his uncle stripped naked and thrown to 120 hungry dogs. Later a news report said that Kim Jong-Un ordered all Korean men to follow his hairstyle. Most of these rumors are never contradicted by North Korea and hence add to the country’s isolation.

Eternal President of the Republic

Every man is equal in death, it is said. No man can carry power or wealth into the afterlife. Kim Il-sung seems to be the one exception to this rule. Kim il-Sung was the President of North Korea between 1972 and 1994. An authoritarian dictator, il-Sung became a cult personality who dominated both North Korean politics and popular culture. Propaganda was the most potent weapon used by him to keep the country under his thumb. Four years after his death, in 1998, the North Korean constitution was amended to declare him the Eternal President of the Republic.

Do not land in North Korea and expect to be in the same time as the rest of the world; or even the same date; more specifically the same year. Confused? North Korea follows a different calendar based on the birth of former leader and the Eternal President Kim il-Sung. North Korea’s official calendar was introduced on September 9, 1997 and is called the Juche calendar. It was designed to be based on Kim il-Sung’s date of birth – April 15, 1912. This year is called Juche 1 and the current year is Juche 104. Kim il-Sung’s birthday is also called Day of the Sun. Even 20 years after his death, a state mourning of 10 days was declared in 2014.

North Korea has one of the largest armies in the entire world, says the U.S. State Department. National propaganda’s major aim is to make the population believe that North Korea is some sort of Utopia while the U.S. and the western countries, envious of its success, are forever on the lookout to attack the country. The huge army is necessary to deter these countries from any attempts at waging a war. The North Korean military has over 1.2 million serving personnel. Almost a fifth of the average male workforce between ages 17 and 54 is employed by the armed forces of the country.

Long hair is unacceptable for men and less popular among women. But haircuts are not merely a matter of choice in North Korea. Or at least this is what popular news reports suggest. There are 28 state approved styles that the men and women in the country may adopt when it comes to doing up their hair. Young college going boys are encouraged to wear their hair in the style adopted by the country’s Supreme Leader Kim Jong-un. Women may choose one of 14 styles of approved haircuts; married women do not have the option of growing their hair long. Men may not grow their hair beyond 2 inches.

Why is this surprising when the entire country remains in isolation? When even tourists are (apparently) forced to a specific circuit or a specific hotel to prevent them from moving about? Because the United Nations is a globally acknowledged international community. The organization is the considered collective global opinion. Even hostile countries allow the UN to visit and resolve mutual problems. In North Korea, however, United Nations has not been able to make much headway. Amnesty International, Human Rights Watch, United Nations – none of these globally reputed organizations have been able to enter the country and visit the labor camps or check the truth of the gross human rights violations reported.

To sustain a form of government that is intolerant to an extreme, where the slightest murmur against the government is considered treason and may be a death warrant, in a country where a traitor or defector is punished and so is two subsequent generations of his family, surveillance on a major scale is perhaps the only friend of the government. Rumors have it that the country is full of millions of cameras in households and in business establishments, apart from schools, colleges, hospitals, and on the streets. Privacy is a pleasure not known to the North Koreans.