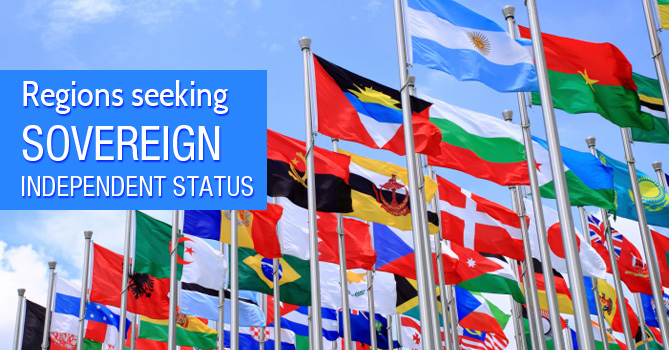 There are several regions seeking an independent sovereign status in many parts of the world and they continue to fight for their cause politically, economically and some, militarily. In many cases, the reasons are deep rooted and go back in history and the struggle for sovereignty is borne out of a need to maintain ethnic and cultural identity which they believe is at threat within the current political system that they belong.

Most regions that are fighting for sovereignty do not have clear plans on how they aim to sustain the new nation, politically and economically, and continue to offer the same living standards their people are presently used to. Since most of the proposed new states will be much smaller geographically the consequent inheritance would also mean limited access to natural resources that may not always be feasible to commercially exploit.

The challenge before newly formed sovereign states is to maintain political and social stability followed by economic progress and offer security to all its citizens. These require large financial resources which may not be locally available. Depending on international agencies can yield limited funding only which leaves out seeking funding from friendly countries but these come at a price that may not always be acceptable to local citizens.

The case with the nationalist Catalan nationalist movement, which is seeking independence from Spain, is different. Catalonia, with the city of Barcelona, is a very prosperous region that contributes more to the Spanish economy than what it receives from the central government. Unlike most regions fighting for sovereign status, Catalonia is quite capable of surviving independently. However, despite the recent unofficial referendum held in 2014 wherein over 80% of the local people voted in favor of independence, the political establishment remains divided.

Scotland’s demand for independence from the United Kingdom dates back a long time in history. The Scottish people have always maintained their distinct identity from the British and many have believed that Scotland should be a sovereign state.

On September 18, 2014, Scotland held an official referendum whether to remain with the United Kingdom or go independent. 55.3% voted to remain within the UK. Unlike Catalonia, Scotland mainly depends on the UK to sustain and promote its tourism, education and scotch whiskey industry, and a move away would bring forth the question of economic sustainability to maintain the current standards that Scotland maintains today.

Quebec lies in the eastern side of Canada and has been raising its call for independence from Canada for a long time. Unlike the rest of Canada where 90% of the people are English speaking, Quebec is mostly French speaking and maintains its linguistic and cultural identity as distinct from the rest of Canada. Overall, Canada is a prosperous country with rich natural resources. Like Catalonia, Quebec can sustain itself as a sovereign state; however, politically, it remains divided over the call for independence.

Tibet and Xinjiang demand for separation

China has two major regions that are demanding independence to maintain their ethnic and cultural identity. Muslim dominated Xinjiang province and Buddhist dominated Tibet are seeking to separate from China and it remains a contentious issue with the central government. People from both regions are distinct in identity from the Han dominated Chinese majority living in across China and know their land has rich natural resources. The strong central leadership has used force to put down any calls for independence.

In India, the Kashmir region has witnessed calls for independence since 1948 with local Kashmiris demanding independence to maintain their cultural identity. The movement has taken to violent struggle since the latter part of 80s but politically the local parties have actively participated in the democratic process that rest of the country follows.

Large parts of Central Asia, Middle East and Africa have various ongoing movements for independence, many of which are inspired by religious or ethnic differences. Yemen is presently witnessing a violent conflict between the Houthis who belong to the Shia sect and the Sunni dominated tribes.

The clash between Shia and Sunni sects of Islam is the root cause for many conflicts in Asia, Middle East and North Africa and is threatening to spread to other parts of the world.

Iraq and Turkey has its Kurds fighting for an independent Kurdistan, Pakistan has the restive Baloch region seeking independence, Tamils in Sri Lanka continue to hope for a separate sovereign state and the Kachins in Burma seek similar freedom.

The United Nations needs to be more pro-active

It is one thing to demand and fight for a sovereign state but without serious thought on feasibility and viability of subsequent political, social and economic stability, it would result in a chaos of the kind seen in Iraq and Libya. The United Nations needs to be more active in engaging with various ethnic and political groups seeking independence and jointly address the viability of a sovereign state.