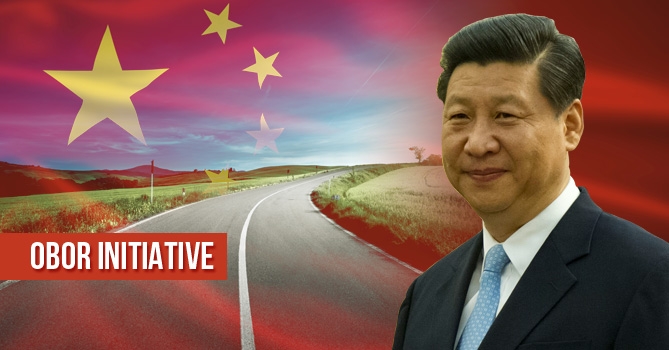 China-led $100 billion Asian Infrastructure and Investment Bank, formally set up in Beijing on December 25, 2015, is about to start its operation soon. Seen as a rival to West dominated World Bank and International Monetary Fund, the AIIB’s key aim is to support infrastructural projects under China’s One-Belt-One-Road (OBOR) initiative through concessionary financing. In that way AIIB is seen as a sister institution of China’s ambitious OBOR initiative which broadly serves the Asian giant’s twin goals- strategic and economic. As per OBOR’s vision document, the initiative which was formally announced by Chinese President Xi Jinping in late 2013 will take as many as 60 countries from Asia, Europe and Africa into account. While OBOR’s ‘Belt’ dimension, consisting of highways, rail routes, oil and gas pipelines and other infrastructural projects will extend from China to Central Asia to Russia, ‘Road’ dimension, consisting of a network of ports and other coastal infrastructure, will cover China’s eastern flank, Southeast Asia, South Asia, the Gulf, the Mediterranean, Europe and Africa.

To be precise, China’s planned economic corridor in Pakistan presents a critical example of its OBOR initiative as the port of Gwadar in Pakistan is one of the points where Belt and Road intersect. The economic corridor, which will link Kashgar in China’s communally restive province of Xinjiang with Gwadar port, will pass through Pakistan-Occupied Kashmir and Gilgit-Baltistan – both Indian territories occupied by Pakistan. And, perhaps, this is a major reason why New Delhi has not yet articulated its approach towards China-led OBOR initiative. India’s concern is that by developing dams, highways and hydropower projects in PoK and Gilgit-Baltistan, China wants to cement its presence in the region, seen by New Delhi as a disputed area but of high strategic importance.

In fact, jury in India is divided over OBOR issue. Some argue that in view of trust deficit between India and China, the former should not be part of China-led OBOR initiative. Their stand is that the initiative is not altogether benevolent, rather by developing economic corridor in Pakistan and connecting the Qinghai-Tibet rail line with Nepal under OBOR project, China plans to encircle India. If media reports are to be believed, Chinese Foreign Minister Wang Yi has asked Nepal to conduct a feasibility study so that the said rail line could be extended to Kathmandu and beyond. China has also a plan to extend its rail line to Yadong which is situated along India-Bhutan border. The 1962 War, lingering border dispute and Chinese aggressive posturing in the South Asia region have given some defence and strategic experts irrefutable reasons to cast aspersions on OBOR initiative’s positive aspect. Rather they say that under the guise of OBOR, China is developing corridors which could be in future used for military mobilization.

But experts like former Foreign Secretary Shyam Saran do not buy such arguments. They say that Indian participation in AIIB and joint ownership of BRICS’ New Development Bank fully affirms New Delhi’s partnership in OBOR project. They also say that the proposed Bangladesh-China-India-Myanmar (BCIM) economic corridor, which starts from Kolkata, actually complements OBOR initiative. Also, they point out the lines of OBOR’s vision document wherein emphasis has been laid on consultation with stakeholders for implementation of projects in the countries along Belt and Road. The initiative “is seen as an instrument to create a contiguous land and maritime zone where countries pursue convergent economic policies, underpinned by both physical infrastructure and supported by trade and financial flows,” Shyam Saran says in his article in The Wire, a popular news portal. It is said that OBOR initiative should be looked with positive frame of mind as it would help meet India’s infrastructural needs which will in turn help transform the country’s economy by trading its goods far and wide through well established rail and road connectivity.

But people are not ready to buy such argument. They say OBOR initiative would enable China to fuel its growth by easily exporting its skilled, semi-skilled manpower along with finished products in the world market. Nonetheless whatever be the contention, it is truth that OBOR is seen as China’s response to US-led Trans-Pacific Partnership in Asia and Transatlantic Trade and Investment Partnership. Both deal with trade pact between America and countries falling in the Pacific region, Europe and Asia.

But when China is giving a push to OBOR initiative, India does not want to lag behind; its ‘Project Mausam’, a transnational project is wrapped in two-dimensional package filled with strategic and cultural fundamentals. It is given a shape in close coordination with the Ministry of External Affairs and the Ministry of Culture. Starting with the Indian subcontinent, it will take into account Southeast Asian region, the Arabian Peninsula and East African nations. Already New Delhi’s diplomatic relations with countries falling in Indian Ocean are very good. But thrust now is being made to revive cultural ties before process of developing strategic engagements with them starts. In that view, it wants to deepen cultural foot prints in Vietnam, Thailand, Malaysia, Cambodia, Indonesia, and of course with Myanmar, the country where India-led Kaladan Transport Project that will be connected with Sitwe Port-is on the way to completion. Developed by Essar group, the multi-million project will serve economic as well as strategic interests of India.

With Southeast Asia, India once enjoyed abiding cultural and historical linkages through Buddhism and Hinduism. Epics like the Ramayana and Mahabharata were ethos of South Asia. These were the crux on which foundation of ‘Look East’ was laid in 1991, yet bond between India and nations of Southeast Asia is limited largely to economic periphery. Strategic association, if any is there with these Southeast Asian nations, they are confined within the architecture of the 1993 established Asean Regional Forum (ARF) where maritime security is one of the dominant issues. However, New Delhi is ready to add new contour to its relations with each of these Southeast Asian nations. And, it is by building a mix of cultural and strategic infrastructure with each country of the region. In this regard, a brief has already been given to Indian ambassadors posted in Indonesia, Malaysia, Vietnam, Thailand and Myanmar. But plans are afoot to vigorously pursue the issue, since China has started aggressively wooing the Indian Ocean countries by giving them huge money for their infrastructure and other non-military program. Even as India lacks China’s money power, it has unalloyed goodwill across the countries that border China.

In that background, while through ‘Project Mausam’ New Delhi seeks cultural and business bonding with nations lying along the Indian Ocean, it is taking help from like-minded nations such as the US, Japan and Thailand to accelerate infrastructure connectivity.