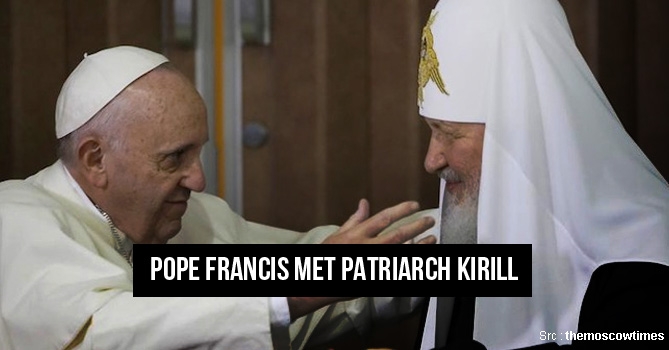 As the two most revered figures of Christianity – Pope Francis, leader of the Roman Catholic Church, and Patriarch Kirill of Moscow, leader of the Russian Orthodox Church – met in Havana, the capital of Cuba, the media went into a tizzy hailing the meeting. It can be considered one of the most important events in Christianity. In 1054, Christianity split into the Western Catholic Church and the Eastern Orthodox Church. Since then, attempts had been made for reconciliation but all of them had failed. So, February 12, 2016 was a historic day, as the two revered leaders broke ice and met for the first time since the 11th century.

The meeting was held at Marti International Airport in Havana, the capital of Cuba. The venue was chosen not by accident but due to the fact that it was far away from the places which were at the center of the schism – notably Moscow, Rome, and Istanbul. This served as a perfect destination where the two leaders could focus on the main issue of protecting Christians from persecution.

The split took place due to an array of reasons ranging from economic, political, cultural, as well as the theological differences that originated before 1000 AD. Things came to such a situation that in 1054, a representative of the Roman Pope excommunicated the patriarch of Constantinople. In reply to this, the Roman Pope was excommunicated by the Patriarch leading to a split within the Christian Church. This led it to branching out into the Western Catholic Church that was based in Rome and the Eastern Orthodox Church based in Constantinople.

The attempts to unite the two churches continued as recent as 1997 when a meeting was planned between Pope John Paul II and Russian Orthodox Patriarch Alexy II. Unfortunately, the meeting was cancelled.

On February 12, the Pope arrived in Cuba to heal one of the biggest wounds Christianity had suffered since 1054. The bonhomie and the urge to improve relations were quite visible as the two leaders embraced and kissed each other at the beginning of talks. The meeting witnessed the two religious figures issuing a joint declaration.

In the 30-point statement, which was centered on a number of issues, the two leaders maintained that they were prepared to take all necessary steps to overcome their historical differences.

Commenting on the plight of Christians, the two leaders jointly called upon the international community to protect Christians who were being persecuted in many countries of the Middle East and North Africa. The document read that “Their churches are being barbarously ravaged and looted, their sacred objects profaned, their monuments destroyed.”

Will the Meeting Heal Relations?

Though the meeting is being touted as between two religious figures and apolitical, speculations still persist. According to reports, the Russian media believes that the visit of the Patriarch to Cuba for a rendezvous with Pope Francis was a political mission. It was aimed at reducing the country’s isolation, which has been brought about by the Western Sanctions because of the Ukraine Crisis. In fact, the air strikes in Syria had earned it international condemnation.

Furthermore, Patriarch Kirill had to outmaneuver hardliners in the church to organize the meeting. One analyst even hinted that the only reason why the patriarch agreed to meet the pope was because the Russian President, Vladimir Putin, wanted him to do so. Analysts believe that Russia tends to greatly benefit by the Pope’s statement for the protection of Christians as the country can use it as a shield against the criticism being leveled on it for its air strikes in Syria.

Despite the fact that noble attempts have been made to bridge the gaps, some thorny issues still exist between the two churches and the biggest of these can perhaps be the Ukrainian Greek Catholic Church. This Church follows the rites of the Eastern Church but answers to the Holy See. However, the Russian Orthodox Church, which considers Western Ukraine its traditional territory, is strongly opposed to papal influence there.

Though it would be hard to wipe away 1,000 years of mistrust in just a single meeting, yet it is indeed a historic and noble step towards sorting out the differences and will mark a turning point in relations between the two churches.