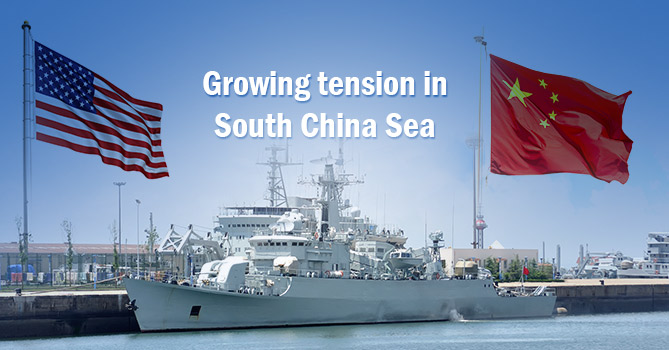 The South China Sea has two chains of islands, Paracels and Spratlys, which is claimed by several sovereign states of the region including the People’s Republic of China, Philippines, Vietnam, Malaysia, Indonesia, Brunei, and Taiwan. The dispute involves territorial and maritime claims and is behind growing tension in the region.

The dispute has China claiming historical jurisdiction over both Paracels and Spratly chain of islands, and has been claiming maritime rights over most of South China Sea. China also lays claim to Scarborough Shoal, which is a chain of atolls, rocky formations and reefs that are located around 100 miles off the Philippines coastal area and around 500 miles from China’s southern island of Hainan.

Why is South China Sea so crucial to all claimant nations?

South China Sea region is believed to hold large reserves of oil and natural gas though the quantum of reserves is still being debated. As per the Ministry of Geological Resources and Mining in China, the area holds close to 17.7 billion tons of crude oil though other international sources state the crude oil reserves to be in the region of 1.1 billion tons.

As per the US Energy Information Administration (EIA), the region close to Reed Bank is believed to hold around 25.5 trillion cubic metres to 56.6 trillion cubic meters of natural gas. The large reserves of crude oil and natural gas has driven all claimant nations to aggressively claim sovereignty over the islands as also maritime access within the Exclusive Economic Zone (EEA) of 200 nautical miles, as defined under the United Nations Convention on the Law of the Sea (UNCLOS).

Historical perspective to the dispute

China claims its sovereignty over the islands dates back to 200 B.C. when Chinese fisherman used to sail to the zones around the Paracels and Spratlys for fishing and have been presenting documentary evidence to back its claims since that period.

Wan Zen, a Chinese author published a book around 220-280 A.D. during the Three Kingdom period, and another author Pei Yuan during the Jin Dynasty, have documented Chinese boats that were sent to patrol and protect fishing boats that sailed to these islands. At various times through the Southern Dynasties (420-479 A.D) and the Tang Dynasty (618-907 A.D.) there is enough documentary evidence that shows these islands were part of the Chinese administrative jurisdiction.

Vietnam’s claim to Paracels goes back to the early 19th century when the Vietnamese Emperor Gia Long ordered a survey and mapping of the Paracels in 1816. The first officially documented claim by the Chinese over Paracels dates back to 1876.

Through the 19th century and into the mid-20th century, various countries staked their claims over Paracels and Spratlys and included the French and the Spanish, besides Vietnam, Philippines and China. Till the end of World War II, Japan controlled the islands, and once the war ended, Japan handed over the territorial jurisdiction to China. China has since defined its territorial waters under the ‘eleven dotted line’ which was later revised to the ‘nine dotted line’ by Premier Zhou Enlai. The claimed territory overlaps with EEAs of all other claimant states.

From 1970s, there have been continual military posturing and clashes between China, Vietnam and the Philippines.

Clashes since the 70s

With Vietnam staking claim over the Paracels in early 70s, China responded with its Navy arriving and asserting its right over the Paracels. In clashes that followed, 70 Vietnamese soldiers lost their lives and China took physical control of the islands.

Tension continued through the 80s as well. In 1988, China once again clashed with Vietnamese soldiers over control of Spratlys. Vietnam lost 60 of its Naval staff.

By 2012, China and Philippines were posturing over access and control of the Scarborough Shoal. In July the same year, China went ahead and established an administrative office in the Paracels called Sansha City. This overt presence and claim by China only exacerbated an already tenuous situation between China, Philippines and Vietnam.

Later the same year, Chinese Naval vessels confronted and rammed two oil exploration  rigs belonging to Vietnam. This led to another round of diplomatic standoff between the two countries.

In 2014, China began establishing oil exploration rigs off the Paracels that led to further clashes between the Vietnamese and Chinese vessels.

In early 2015, satellite imagery showed China building an airstrip on reclaimed land in Spratlys. This triggered another round of vociferous protests against the Chinese action from all other countries involved in the dispute.

In response, the U.S. has now taken up a position to ensure access and free passage to all shipping activity through the South China Sea, Chinese protests notwithstanding. In an official assertion of its rights to international maritime access, the U.S. Navy dispatched a guided missile destroyer to sail the seas within 12 nautical miles of the artificial island being built by China. The U.S. ship was closely trailed by Chinese Naval ships and the subsequent official statement released by China warned the U.S. not to get involved in the dispute and to stay clear from waters it claims as its own.

In a major blow to Chinese efforts to claim unilateral sovereignty over most of South China Sea, the Permanent Court of Arbitration in Hague has accepted a petition from the Philippines for the first time, to hear the appeal under UNCLOS. Though the U.S. is not a signatory to UNCLOS, it has welcomed the move by the international court. China has rejected the move and has decided to boycott the proceedings. While the court’s ruling is binding, it does not have the powers to enforce its rulings.

The South China Sea dispute is in addition to the longstanding dispute China has with Japan over the Senkaku Islands, located in East China Sea. China refers to the islands as Diaoyu.