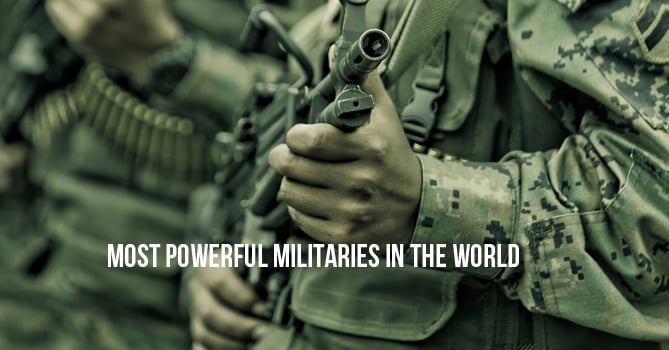 The U.S. is the global leader when it comes to military might. It has an astronomical defense budget of $612 billion. In recent times a number of factors such as spending cuts and sequestration have contributed to bringing down its defense expenditure. However, this figure is still more than the combined amount spent by the next 10 countries. It has a fleet of 19 aircraft carriers, which can be regarded as its major edge as far as traditional military is concerned. All the other countries in the world together have only 12 such carriers.

Thanks to these huge ships it is possible for the U.S. to set up a base anywhere it pleases and thus show how strong it is to the rest of the world. It also has the finest aircraft in the world and other technological advantages such as the new rail gun used by the U.S. Navy. Its human force is huge and also highly-trained. Besides, there is the small matter of the largest nuclear arsenal of the world.

It has been more than 20 years since the collapse of the erstwhile Soviet Union. However, Russia’s military might is on the ascendancy yet again. From 2008, Russia’s military expenses have increased by at least 30% and in the next three years the growth rate is expected to surpass 44%. As of 2014, Russia’s defense spending has been estimated at $76.6 billion. Russia presently has almost 766,000 army personnel, who are stationed on active duty. Its reserve force amounts to 2,485,000 people. Russia also has the biggest tank force in the world with 15,500 tanks. However, the major drawbacks for the Russian soldier are that their equipments – like their tanks – are on the wane and their training is normally average compared to several other countries.

In recent years China has started a policy of incessant military expenses. Since 2013, its expenses increased by 12.2%. Officially, China spent $126 billion in defense spending in 2014 – it is expected that the unofficial amount could be much higher. China presently has border issues with countries such as India, Japan, and Philippines and this is why such huge military spending is giving rise to concerns as people are wary that China may be trying to project its military might in order to gain the upper hand in these cases. China has a huge army with 2,285,000 active soldiers and other personnel. Its reserve force amounts to 2,300,000. It is also supposedly capable of misappropriating critical military technology. This is evinced in the way it was able to gain such information about the F-35 launched in 2014.

India at present is looking to modernize its army and this means that its military expenses could rise in the future. As of 2014, India spent approximately $46 billion and it is expected that by 2020 it will become the fourth highest spender in this regard. At present, India happens to be the biggest importer of military equipment in the world. The ballistic missiles of India are capable of completely wiping out countries as small as Pakistan or causing major damage to a country of the size of China. Incidentally, India’s relations with both these countries have not been the best with the 1962 war against China and the various battles over the years with Pakistan.

One of the leading military powers of the world, the UK is looking to reduce its armed forces by 20% by 2018. It is expected that the cuts – perhaps small in nature – will be made to the Royal Air Force and the Royal Navy. In spite of all these planned reductions, the UK looks at being able to portray an image of power around the world. The Royal Navy is looking to launch the HMS Queen Elizabeth by 2020. This is an aircraft carrier with a flight deck of 4.5 acres. It will ferry as many as 40 F-35B joint strike fighters across the world. It is also expected that the UK will be able to hold its own against emerging powers like China because of its superior training.

From 2013 onwards France has brought down its military expenses and also offloaded 10% of its defense force with the aim of saving money for buying high-end technological equipment. As of 2014, France’s defense spending has been estimated at $43 billion a year, which was 1.9% of its GDP. This figure was much less than the spending limit prescribed by NATO for its member countries. In spite of all this France is capable of being counted as a major military power of the world, something which is borne out by the deployment of its forces in countries such as Central African Republic, Mali, Chad, and Senegal.

Germany’s military strength is not at par with its economic capabilities on the global stage. Of late, Germany has opted to provide military assistance to members of NATO in Eastern Europe. It is also looking to take up an active role from this perspective. As of 2014, its military spending is $45 billion making it the eighth highest spender in the world. German people, as a norm, have been averse to war ever since the Second World War. Officially, there are no restrictions on the size of the German military but people in general are not interested in serving in the national military. There are only around 183,000 active personnel and a reserve force of 145,000. From 2011 onwards Germany has also done away with mandatory military service.

In 2014, the military expense of Turkey increased by almost 9.4% compared to 2013. There are several reasons for the increase in spending such as the present conflict in Syria, the PKK, clashes with Kurdish separatists, etc. Its defense budget for 2014 stood at $18.2 billion. Turkey is also an important member of the NATO and has offered its soldiers for various programs around the world. The Turkish army participated in the peacekeeping operations in the Balkans and in Afghanistan. It also has a huge force in northern Cyprus.

South Korea, Israel, and Japan are other major countries in this regard.