What are the Ten Least Expensive Cities in the World? - Answers 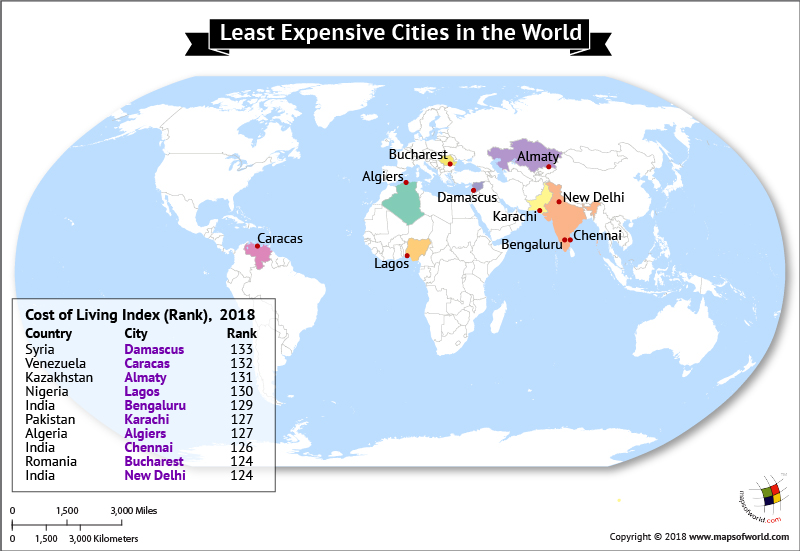 The Economist Intelligence Unit releases the cost of living survey every year, which compares the prices of 160 goods and services in 133 nations across the globe. On this basis, it ranks the world’s most expensive and least expensive cities to live in.

According to the survey of 2018, the least expensive city in the world is Damascus, the largest city in Syria. It dropped 14 places in comparison to last year. The city which has been ranked 133, suffered a massive impact of political and economic disruption in the region.

Almaty, the largest metropolis of Kazakhstan, was the cheapest city in 2017 survey but ranks the 3rd this year. It is a pocket-friendly destination, and a great place to spend vacation with your family.

Following Almaty closely, is the Nigerian city of Lagos. The city ranked 130th in the cost of living survey. The city is most populous in Nigeria as well as the African continent. It also has the highest GDP in the continent.

The Indian subcontinent remains structurally cheap, and three Indian cities are amid the ten least expensive cities, naming Bengaluru, Chennai and New Delhi.
Bengaluru, India’s Silicon Valley, is ranked 131. It is a cosmopolitan city with friendly people and offers great value for money.
Chennai, the capital of southern state Tamil Nadu, holds 126th rank. It is one of the most visited Indian cities by foreign tourists.
New Delhi, placed at 124th rank, comprises splendid hotels, architectural wonders and mouth-watering cuisine. It is a fascinating place to spend a vacation in India.

Ranked 127, the Pakistani city of Karachi, is the sixth least expensive city in the world. The premier industrial and financial center of Pakistan, Karachi has jumped two places in the 2018 survey. It is positioned along Algiers, the capital of Algeria, which holds the same rank as last year.

Bucharest, the Romanian capital is also ranked 124th, along with New Delhi. Bucharest is home to many amazing museums, historic buildings and has an amazing cafe culture, thus attracting many tourists.

Here is a table showing the ranks of the ten least expensive cities: