Does Slavery Still Exist in the World? - Answers 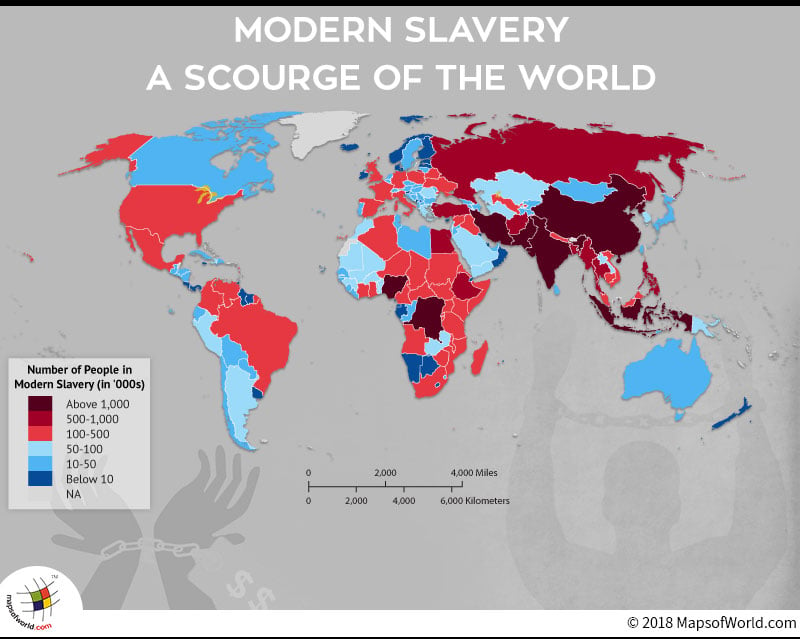 Slavery was one of the most abhorrent and disgusting man-made tragedy. It not only wrecked the lives of the people who had the misfortune to fall in its trap, but also that of the affected person’s family members. Slavery was once widely practiced; however, in the modern age all the recognized countries have outlawed it.

However, if you are harboring the illusion that slavery is long dead and gone from the face of the earth, it is time for reflection. Slavery is very much rampant in the modern world, though it is no longer recognized. An estimated 40.3 million people are still in “modern slavery” around the world. Human trafficking, debt bondage, child soldiers, forced marriages, and domestic servants kept in captivity are only a few forms of the modern slavery.

Many people in the continent of Africa, hope to migrate so they can avoid becoming a victim to extreme abuse which comes under sections of modern slavery. The problematic issue is noticed more in nations which have lower economic wealth or weak rule of law. It is also persistent in countries which are disrupted with internal conflicts.  On the same note, Global Slavery Index released in 2017, also reflects how nations which are economically well-developed are responsible for perpetuating modern slavery. Despite the wealth in these countries, crimes related to slavery are occurring at an alarming rate and within their global chains.

Meanwhile, progressive actions to eliminate slavery are being processed, and countries are welcoming the new anti-slavery laws. Yet, weak labor laws and restricted immigration policies are some reasons why abuse continues. People working in the “gig economy”, that is, the ones who don’t sustain permanent jobs and remain on the look out for short-term projects, are more vulnerable to be a victim.

According to a data by the Global Slavery Index 2017, India had more than 7 million people under modern slavery. It was back in colonial times, that Indians were turned into slaves by British Raj. However, with Slavery Abolition Act 1833, slavery was criminalized. In the modern times, bonded labor, child labor, forced marriage, human trafficking, forced begging, etc are quite evident in the country.

Next in the index, stands Pakistan, the neighboring country of India, having over 3 million people under slavery. It is followed by China and North Korea. Even if these are Asian countries, if data is estimated regionally, Africa has the highest average vulnerability score, i.e. 62% and Arab states had the second highest vulnerability, i.e. 57%. Europe and Central Asia on the other hand, had the least vulnerability to slavery victimization, i.e. 28%.

Unfortunately, even in the most developed and advanced countries around the world, there were quite a few people in modern slavery. For example, in the United States, the figure stood at 403,00. Human trafficking persists in the country to a large extent. Every year, about 17,500 foreign nationals and over 200,000 American citizens are trafficked into and within the USA, of which 80% of the victims are women and children.

The lowest ranked countries were Iceland and Luxembourg, having less than 1000 people stuck in modern slavery. Globally, the number might have decreased, but the rate is slower than one would have hoped.  The need of the hour is strict policies and numerous government strategies to combat the problem, and avail freedom to everyone.

The data provides information on the number of people in modern slavery around the world.