What are the cities with the most billionaires? - Answers 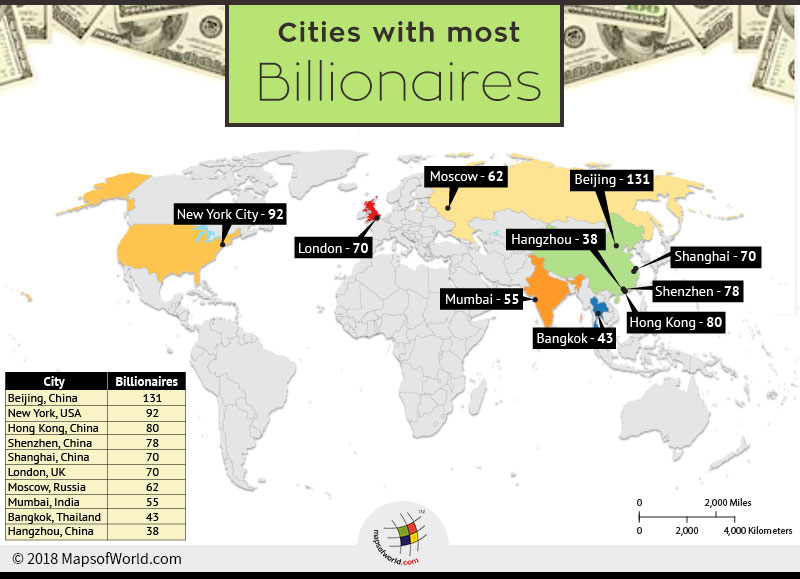 “I believe you have to be willing to be misunderstood if you’re going to innovate.” said Jeff Bezos, who became a billionaire after founding Amazon.
The classical dream of an average person is turning their fate from rags to riches. How does a person go from, earning just enough money to pay the bills, to living a life of utter luxury? People with high ambition often seek business advice from the self-made richest men of the world.

Billionaires – play a huge role in the global economic development, as they willfully engage in both investments and charity. As of January, 2018, there are 2,694 billionaires across the globe. Most of these billionaires have attained good fortune and opportunities, owing to the city they lived in.

The capital of People’s Republic of China, Beijing has 131 billionaires, which is the highest number amid the rest of the cities world-wide. It is for the first time that some city has surpassed the billionaire population of the US city, New York. The economy of the city contributes to about 3.43% of country’s total output, and is home to largest companies of the world. Hong Kong, Shenzhen, Shanghai, Hangzhou – four major cities of China also stand amid the top ten having 80, 78, 70 and 38 number of total billionaires, respectively.
The city of New York is itself known as the land where dreams come true. No doubt, it has been home to a large number of billionaires over the years. Currently, 92 billionaires are living in the city. In 2014 and 2015 released reports by Business Insider and Forbes Magazine respectively, New York had topped the charts for most billionaires.

London – one of the most visited cities of the world, and capital of the United Kingdom has a population of 70 billionaires. London is also an internationally dominating financial center in terms of business and commerce. Numerous service industries situated in the city, are the base of economy of the country. Self-made billionaires like Len Blavatnik, owner of Access Industries and Mark Scheinberg, co-founder of online gambling company PokerStars, are enjoying the quality of life the city avails them.

Moscow, the capital and most populous city of Russia, accounts for one-fifth of country’s gross domestic product (GDP). Sixty-two billionaires live in the city; however, unemployment rates are still quite low. Corruption and economic instability prevail in the city, despite increased growth in business sectors since the 1998 Russian financial crisis. The ‘New Russians,’ a term used in derogatory sense, are known to flaunt their wealth via ‘haute couture’ and ‘haute cuisine.’

Mumbai, the financial capital of India, has some of the richest people living in it, like Mukesh Ambani and Kumar Birla. Fifty-five billionaires live in the city known for its free-living and one of the well-known movie industry, Bollywood. Headquarters of numerous financial institutions like Reserve Bank of India and National Stock Exchange and well-known Indian companies like Tata Group and Reliance Industries are located in Mumbai.

Bangkok, the capital of Thailand, ranks ninth in the list, with number of billionaires being 43. With the rise in exports and expansive tourism, the economy of Thailand has given a swell to the wealth of country’s richest people.

Here is a quick glance at the ranking of top ten cities, as per Hurun List 2018: