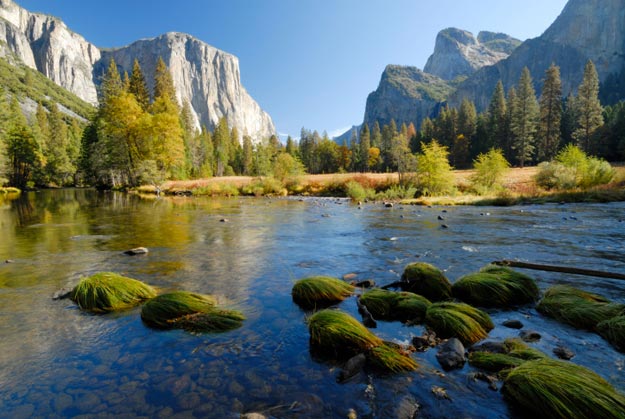 Yosemite National Park in USA receives around 3.7 million people annually who come to see its scenic landscapes, deep valleys, spectacular granite cliffs, grand meadows, and giant sequoias. It is managed by the National Park Service. In the year 1984, it was designated as a UNESCO World Heritage site. The park features an elevation range from 2,127 to 13,114-feet. There are several places to see in the park:

While Yosemite has many waterfalls to check out, Yosemite Falls is the tallest waterfall in North America at 739 meters (2,425 feet). Horsetail Fall (1,000 feet) is another popular waterfall in the park. The waterfall cascading in the formation of a horse’s tail appears to be on fire due to the glow of the sunset in mid-to-late-February. The other falls include Sentinel Falls (about 2,000 feet), Ribbon Fall (1,612 feet), Wapama Falls (1,400 feet), Bridalveil Fall (620 feet), Nevada Fall (594 feet), Vernal Fall (317 feet), Illilouette Fall (370 feet), and Chilnualna Falls (about 2,200 feet).

Three of the groves at the park boast of enormous ancient giant sequoias. The Mariposa grove is the most easily accessible for its location near the park’s south entrance.

Glacier Point offers an appealing view of Yosemite Valley, Yosemite’s high country, Yosemite Falls, and Half Dome. Cross-country skiers can enjoy these views from mid-December through March after skiing 10.5 miles.

Sentinel Rock, the Three Brothers, El Capitan, Half Dome, Cathedral Rocks and Spires are some of the famous rock formations at the Yosemite National Park.

Besides the Glacier Point, the valley boasts of several viewpoints including Olmsted Point, Tunnel View, O’Shaugnessy Dam, Pothole Dome, El Capitan Meadow, etc. Half Dome is a famous landmark of Yosemite National Park, where visitors can climb the 8.2 miles to the top.

Only a few lakes are easily accessible in the Yosemite National Park. Tenaya Lake and Mirror Lake are two of the frequently visited lakes.

Tourists can enjoy several activities including outdoor adventures like hiking, climbing, camping, picnicking, and kayaking at the park. 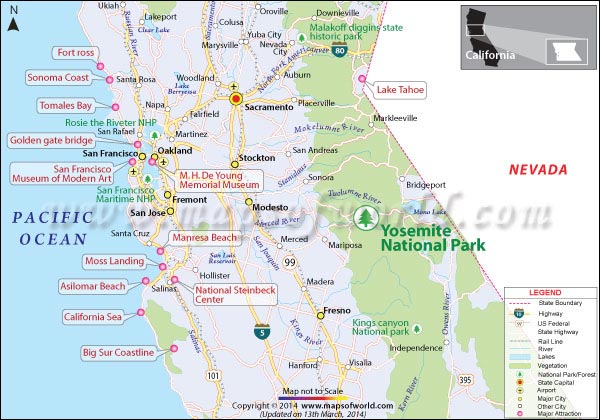 Where is Yosemite National Park?

Yosemite is situated in Central California, a few hours drive from Sacramento or the San Francisco Bay Area. Having a car can make a trip to Yosemite much easier, as some parts of the park are located a long distance from one another, but heavy traffic during the busy season can make driving by car a hassle. Shuttle bus services are available around the park. You can reach Yosemite park by a one-hour-drive from the Fresno Yosemite International Airport.

Spring is one of the best times to visit Yosemite, because waterfalls are at their peak, as the winter’s snowpack begins to melt. Winter is also very beautiful in Yosemite, when the park is covered in a blanket of snow, but many parts of the park are closed during the winter. Summer is a popular time to go, but the crowds are heavy, the temperatures are high, and the waterfalls begin to dwindle.

Yosemite National Park opens round the clock, 365 days a year.

The entrance fee to the Yosemite National Park is as follows: