This Physical Map of Tanzania displays relief, including plateaus, rivers, lakes, mountain peaks, plains, and other topographic features of Tanzania. 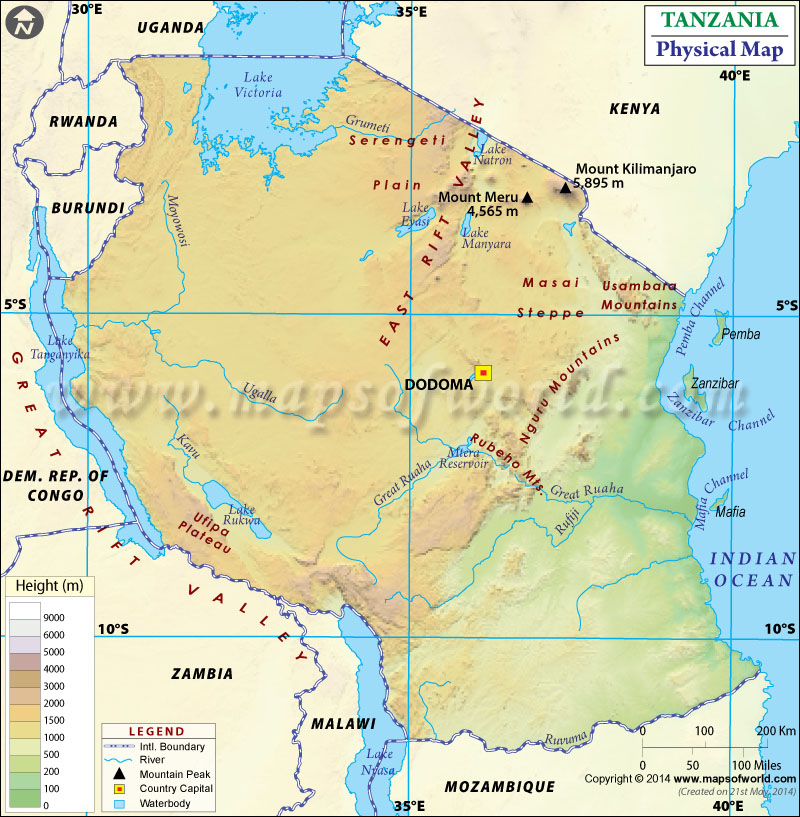 Tanzania, known as the United Republic of Tanzania officially, is East Africa within the African Great Lakes region. Tanzania shares its boundary with Uganda to the north, the Comoro Islands and the Indian Ocean to the east, Kenya to the northeast, Malawi and Mozambique to the south, Burundi, Rwanda, Zambia to the Southwest and the Democratic Republic of the Congo to the west.

The country covers an area of over 947,303 square kilometres (365,756 sq mi). The capital city of Tanzania, Dodoma, is also marked on the map. A map legend at the bottom helps all the signs, characters, graphics, and symbols used throughout the map. The Tanzania Physical Map can be used for school presentations and other purposes.

Tanzania comprises many national parks, numerous lakes, the highest point of Africa, Mount Kilimanjaro, and other spectacular relief features. The terrain of mainland Tanzania lies above 600 feet (200 metres), mostly except for the narrow coastal belt of the mainlands and offshore islands. Northeast Tanzania has a mountain terrain, whereas the centre of Tanzania is a large plateau, a part of the East African Plateau. The East African Rift System runs through mainland Tanzania into two north-south branches, western Rift Valley and Eastern Rift Valley. This relief leaves a narrow, deep depression filled by the lakes. The specific Geographic regions of Tanzania are:

Umba Valley region is located in the north of the Usambara Mountains in the Tanga Region of Tanzania. The area is the world’s only source of Umba sapphires, and the Umba River flows through the Umba Valley. Olduvai Gorge is a steep-sided ravine in the Great Rift Valley about 48 km (30 mi) long. The gorge is located in the eastern Serengeti Plains within Ngorongoro Conservation Area in Tanzania. It is one of the most critical Paleoanthropological localities in the world.

The region is located in Menai Bay, southwest of the Zanzibar Archipelago in Tanzania. It is the largest Conservation area of Zanzibar and has a coastline of 61km, and has six inlets.

Significant Lakes and Rivers in Tanzania

Three significant lakes within Tanzania that are part of the African Great Lakes are Lake Victoria, Lake Tanganyika, and Lake Nyasa. Lake Victoria lies in the north and west of the country and is the largest lake in Africa. Lake Tanganyika is the deepest lake in Africa, separating the Democratic Republic of the Congo from Tanzania. The country’s essential rivers from north to south are Pangani, Wami, Ruvu, Rufiji, Matandu and Rumma River. These rivers drain central and Eastern Tanzania and then empty into the Indian Ocean. The rivers of northern Tanzania drains into lake Victoria, which empties into River Nile.