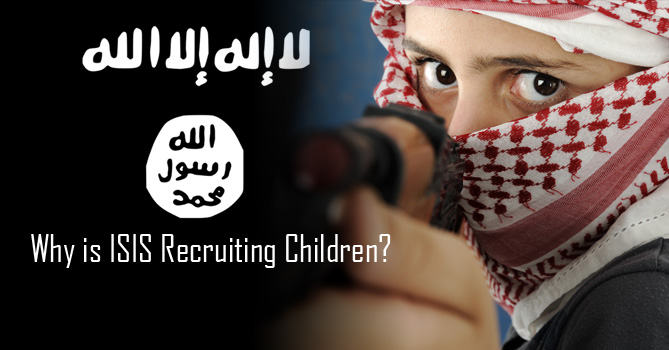 The face of the ISIS (Islamic State of Iraq & Syria) is transforming. Its fresh recruits are not only young men from across the world, but its new members also include women fighters, adolescents and children aged anywhere between 8 and 16. The dramatic change in the demography of the ISIS soldiers was initially compared to the last years of the Nazi Germany during WWII, where young fighters were recruited to compensate for the loss in territory and men, and was thus mistaken as a sign of approaching victory for the US-led forces in the war on ISIS. The trends that subsequently emerged in 2015, however, pointed to something very different.

Induction of Children Aged Between 12 and 16

Not only had the ISIS ranks swelled in terms of the number of adults it was recruiting on daily basis, but there were also a significant number of adolescents and children who were being brainwashed into joining the ranks. According to some recent research reports published on the basis of a study conducted by the Georgia State University, out of the 89 death notices of the children who perished in such missions, the minors came from at least 14 nationalities. A majority of them were from Iraq and Syria, while others came from the Middle East and North Africa. At least two were from Britain while one each from France and Australia.

The study reports that almost 60 percent of the child soldiers were aged between 12 and 16 and within a year, the death rate has doubled for those aged below 18. Broad research on the recruitment of children in the ISIS ranks goes to show that the state does not offer any differential treatment to its child soldiers. Contrary to what was initially believed, the children soldiers of the ISIS are not being used as substitutes, but are being trained to fight alongside the adults in planned suicide missions. According to the 89 cases examined in the study, 36 underage fighters were killed after they carried out operations that involved suicide attacks using vehicles loaded with explosives while 18 were a part of direct ground battles that involved firing weapons and then detonating suicide vests.

How do ISIS Recruit Children?

Ground reports from Syria paint a grim picture of how the ISIS is indoctrinating young boys and providing them with training on the use of arms and ammunition. The state is using a variety of ways at its disposal to ingratiate the kids. According to PBS reporter Zeina Karam, the ISIS entices children by presenting them with cash, gifts and toys and also use intimidation tactics.

Gradually, the children are subjected to the ISIS propaganda and are subsequently turned against their families. The ISIS, besides targeting schools and mosques, also uses the refugee camps to try and find new recruits. Sometimes, according to Karam, it is done under the guise of humanitarian work. The target population includes mostly orphans or children in need of money. In other cases, however, the children are taken away with due parental consent. Parents, specifically mothers are being convinced that they are sacrificing their sons for an honorable mission, which is the success of the Islamic state.

The recruits are forced to watch beheading videos and are handed swords and guns to chop off the heads of dolls as practice on beheadings.

Why Recruiting the Children?

The unprecedented increase in child recruits, some believe, is a part of the larger plan. The ISIS, it is emphasized, is trying to cultivate a next generation of jihadists, an entire generation of loyalists to the state with extremism and terrorism implanted in their minds. The use of children is also presumed to be militarily advantageous as they are more likely to go unnoticed in crowds. Child soldiers also represent what is called ‘psychological warfare’, where they can effectively break defenses and muddle with enemy soldier’s plans.

The use of child soldiers raises some very important questions. The primary question concerns the moral and ethical questions this raises for the soldiers who engage with the ISIS fighters on ground. How the terms of such engagement would change as the circumstances unfold, will need to be watched out for. Also important would be the question of rehabilitation and reintegration of the children who manage to escape or defect the Islamic state. Another important question concerns the measures to gain control on and prevent such recruitment drives.

The fact that the Islamic state is challenging the traditional forms of military warfare presents the global community with a series of complex situations that bring with them tough questions and tougher possibilities.