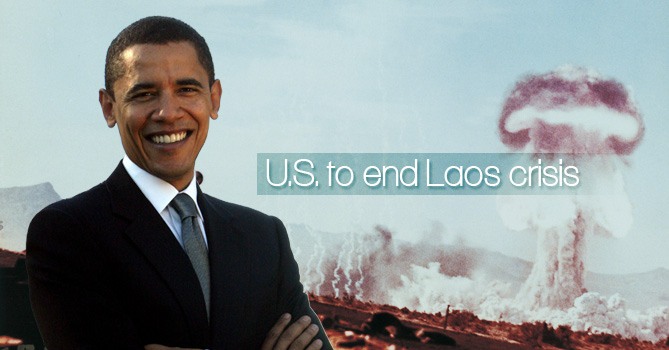 President Barack Obama wants some Vietnam-era bombs, which never exploded, to be cleared from Laos. These bombs were dropped as part of Operation Menu, a military program that ran from 1964 to 1973 in Laos as well as eastern Cambodia. This operation was carried out in a covert manner by the United States Strategic Air Command. The main aim of these attacks was to destroy the bases and shelters of Viet Cong forces and People’s Army of Vietnam (PAVN). The aforementioned entities used these areas in order to refurbish their supplies, train, and catch a breath while fighting a war with the US at South Vietnam, which was then known as Republic of Vietnam and was located just across the border. In the end the US was unable to stop North Vietnamese forces from taking over and administering the country.

How much bombing was done and how do these bombs persist till date?

The said bombs are being called UXO or leftover unexplained ordinance. This implies that they are still there and have not exploded. Between 1964 and 1973 US dropped at least two million tons of bombs. In all, 580,000 bombing missions were carried out. This meant that almost one plane full of bombs was dropped at an interval of every eight minutes. This also makes Laos one of the countries to have faced the most massive amount of bombing on a per capita basis. In the nine year period the bombings left a trail of destruction ravaging scores of villages and displacing hundreds thousands of individuals.

At least 33% of the said bombs never exploded, which meant that vast areas of Laos were poisoned. The entire terrain has in many places been filled with craters. Till date more than 20,000 people have either lost their lives or been grievously injured because of the UXO explosions. This includes children as well. In fact, the situation after 1973 was so bad that many Laotians fled the country and went and sought refuge in the US itself. Laos presently accounts for more than 50% of casualties suffered from cluster ammunitions, the kind of which was dropped over there by the US. In spite of the US’ concerted efforts, not even 1% of the said bombs have been destroyed till date.

How has Obama helped improve the situation?

Barack Obama has played a significant role in improving the relations between the US and Laos. He has been actively pushing for greater efforts to remove the UXO from Laos, which is indeed a legacy that the US would like to correct. It is also expected following Kerry’s visit to Vientiane that the US President will announce a major initiative in this regard. In 2013, Hilary Clinton became the first Secretary of State to visit Laos after a gap of 55 years. It is through such various initiatives that Obama has attempted to gain back the trust of the former rivals. Obama has also extended a helping hand to other countries in the region such as Cambodia, Thailand, and Vietnam by helping better their infrastructure, education, and health setups.

How is the US planning to help Laos, improve ties, and compensate for damages?

It is expected that the US might increase funding in Laos in order to clear the UXO. It started to clear the said payload more than five years back. Initially it used to spend $5 million each year. In 2014 it spent $15 million and in 2015 this amount went go up to $19.5 million. While it has not yet decided on the amount it is expected that it will indeed go up in 2016. Its efforts have made a significant contribution in the number of people who are killed or wounded because of the UXOs exploding. Traditionally, relations between both the countries have not always been the most cooperative but in the last few years both have worked towards improving relations with each other.

The US has also announced several programs that are expected to address key issues in Laos like hunger and access to technology. It is expected to start a program of meals in schools of Laos with the budget fixed at US $6 million. One of the major problems in Laos is the stunted growth of children owing to malnutrition. One hopes that this program will address that deficit adequately. The US is also helping Laos with technology that could improve the potency of Lower Mekong.