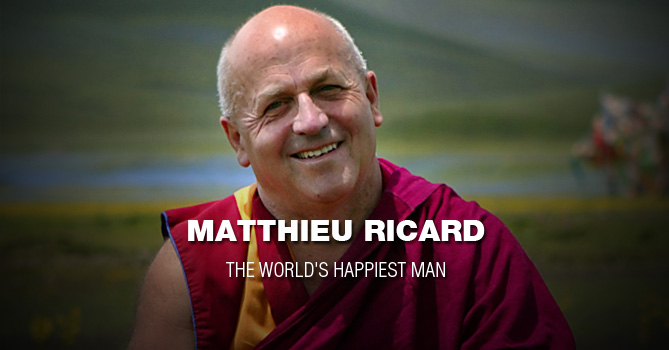 The results and main parameter of the test

Davidson said that as per the scans when Ricard concentrated on the issue of compassion his brain produced a level of gamma waves that had never before been seen in the context of neuroscience. Incidentally these waves are related to brain functions such as consciousness, learning, attention, and memory. It was also revealed that he could use the left prefrontal cortex in his brain much more than the right part and this meant that his capacity for happiness was significantly greater than any normal human being. This result also implied that he had very little tendency to court negative thoughts. The main area being tested was the effect that mind training over short and long term via meditation had over faculties such as attention, emotional balance, and compassion.

How is altruism relevant in present day world?

Ricard says that altruism is basically the wish of helping others. This implies that when someone wants to do good by others it has to be done in such a way that it can create the maximum impact in the life of the beneficiary. This is why the benefactor needs to be extremely discerning as well as careful. The happiest man in the world also says that when we are moved by the sufferings of others we need to make sure that we do not get sentimentally attached to the same and treat it in an objective manner as it will help us act properly in that particular situation.

What is Ricard’s message to the world to stay happy? What can we learn from him?

Ricard says that anyone can become the happiest man or woman on Earth just by looking at the right place for that source of happiness. He also believes in the inherent goodness of human nature and finds his title of being the happiest man on Earth a complete exaggeration. He also does not own any property or money as such with his only possession being a laptop, where perhaps he has been working on his thesis on altruism and trying to prove how it can help society become better, even if slowly.

There are so many things to learn from Ricard. First of all, his message of looking at the right place for happiness is a very applicable one given the fact that most of us labor all our lives in order to earn money and shower ourselves with all the imaginable worldly pleasures. For this we do high-paying jobs, even if we hate them. Most of us are never able to achieve those aims and we end up leading unsatisfactory, unproductive and unhappy lives. However, if we did something we loved or liked then we would be much better off. At times, the choices that we make in our personal lives also reflect this trophy hunting tendency.

We can also learn a lot from Ricard’s emphasis that his title of the happiest man on Earth is an absolute exaggeration. If such a title can be regarded with such total disregard then perhaps we also can take ourselves a lot less seriously and this can assuage problems related to ego and temper, and make some significant improvement to our personal lives. Ricard’s overall gaiety and inner satisfaction in spite of having nearly negligible earthly possessions teaches us to be inherently secure. If we can have self-belief we can survive no matter what. In a world where distrust is always on the up and rights of other individuals are being constantly violated, Ricard’s emphasis on the inherent goodness of human nature tells us that we need to have faith in others of our ilk. Coming to altruism, where an increasing number of people are facing problems in just getting by perhaps it is for the greater good that people who are able to help them as much as is possible for them. Even the smallest of helps may make some major positive difference to their lives.