What are the Visa Requirements for British Tourists Around the World? - Answers 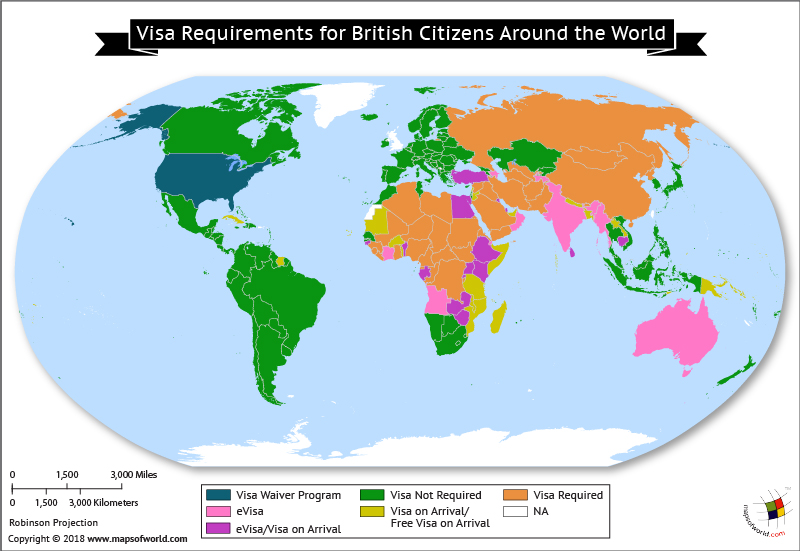 The British have the privilege of freedom of movement within European nations, especially to those countries which are members of the European Union. As the United Kingdom is still a part of EU, the residents of the country can live, work, or travel to any other EU member state and vice-versa without a visa. These nations include; Austria, Belgium, Bulgaria, Finland, France, Germany, Ireland, Italy, Spain, Sweden and some other nations. However, the situation might change once United Kingdom withdraws from the EU, as scheduled for March 29th, 2019.

Apart from these nations, there are many other countries where British tourists can travel hassle free and do not require any visa for a long stay. Some of these nations are; Argentina, Bahamas, Brazil, Canada, Colombia, Vietnam, Thailand, South Africa and Singapore. A couple of countries offer Brits the benefit of Visa-on-Arrival or eVisa, some of these countries are; Bahrain, Cambodia, Egypt, Ethiopia, Lebanon, Nepal, Oman, Qatar, Zimbabwe, India, Sri Lanka, Kenya, Myanmar, and Turkey.

In fact, Jordan, The Maldives, Tonga, The United Arab Emirates, Solomon Islands and Papua New Guinea, are some of the few nations that offer British tourists free visa on arrival.

The United States offers British tourists a Visa Waiver Program. This allows Brits to travel to the United States for business or pleasure for up to 90 days without having to apply for a visa.
There are still a few countries where Brits need to go through the arrangement of applying for a visa. These countries are; Bhutan, China, Russia, Saudi Arabia, Iran, Nigeria, Mongolia and South Sudan.

Find the table below to know about British Visa requirement in different countries: