Countries with Most Commercial Banks 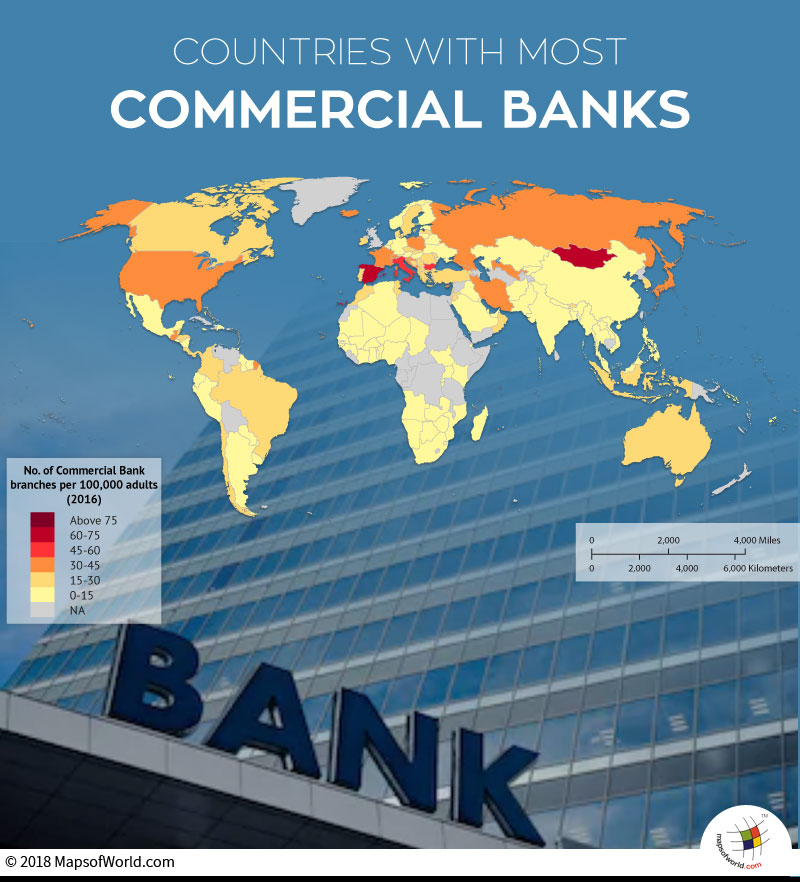 The transition from an informal system of moneylending to the formal system of banking is a prerequisite for economic development. Commercial banks have thus formed the backbone of a stable economy and sustained economic functioning. A commercial bank is a financial institution that traditionally performs three basic functions: Accepting deposits, advancing loans and enabling customers to make payments. A commercial bank branch is physically separated from the main office but is not organized as a legally separate subsidiary.

The depository function of a bank enables customers to make deposits in return of a small administration fee. The banks allure the depositors with interest rates, to make deposits of three types. The current account deposits, ordinarily for business purposes, does not yield interest and can be withdrawn at any point of time. The saving account types of deposits, offered by the banks are primarily for small savers who can withdraw a limited amount, by writing a check. Lastly, the fixed deposits also called certificate of deposits, are the deposits that cannot be withdrawn prior to the maturity date. These render the highest rate of interest to the depositors.

The second function of the bank, is advancing credit; this is the primary process banks make revenue. The difference between the rate of interest charged from the borrowers and the interest rate offered to the depositors, is the way of drawing revenue for the bank. Factors like the financial status, business profile, and the ability to repay the loan are considered before financing out these loans.

The third basic function of a bank is to enable its customers to make payments. The banks act as agents of payments and providers of money transmitting services.

The main clash between the banks motive, is to provide profitability to its shareholders and maintain enough liquidity to meet the customers demand. Through the mechanism of credit creation, the banks act as a main agent in the functioning of a stable economy. In a globally integrated world the ability of a bank to reduce transaction cost by aggregate settlement of payment and easy access to capital allowing business debt, is only being pronounced.

According to the International Monetary fund, Financial Access Survey, European countries like San Marino, Luxembourg, Spain and Italy, have the largest number of commercial bank branches per 100,000 adults. Cross country studies have shown relationship between the financial volume and regional growth. A single banking system and financial integration, points towards the higher number of commercial branches in these nations.

On the other hand, Ukraine, Belarus, South Sudan and Afghanistan have the fewest number of bank branches per 100,000 adults. A significant boost in lending is yet to catch pace in these countries. They face the common concern of low asset quality and balance sheet troubles.

Below lying is a table depicting the number of commercial banks per 100,00 adults.