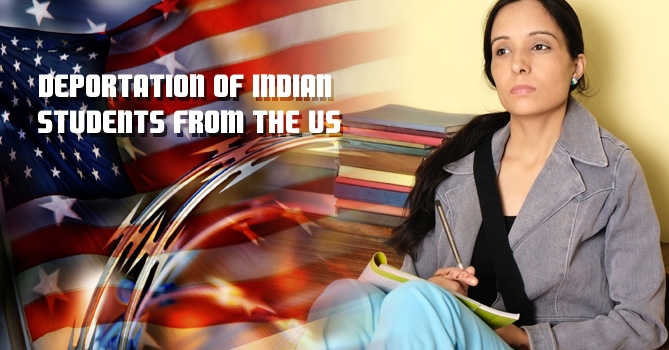 High handed approach of the US immigration authorities against Indian students has once again exposed the mess that surrounds American system. So far as many as 200 Indian students, largely from Hyderabad, have been deported in the last fortnight by the US authorities. Some students have been treated very humiliatingly in that process. For example, a student who was sent back by the US authorities from California has alleged that she was handcuffed and locked up by immigration authorities at the airport. This is indeed shocking. Particularly, in the background of fact that they were students and they boarded plane to reach the US to fulfill their dreams of getting admitted to American academic institutions, they should not have been treated like law offenders. Because, it is not their fault if California-based Northwestern Polytechnic and Silicon Valley universities they are headed towards, are doubted for their academic credentials. Should not US consulate officials who gave visas to these students, tell them beforehand about these institutions’ credentials?

There are common complaints from students that when they were applying for visas for study in Northwestern Polytechnic and Silicon Valley universities they were not told by US officials that these were blacklisted academic institutions. But instead of keeping their house in order and having a close coordination among officials of various American agencies, including Department of Homeland Security, the US squarely blamed students for applying for admissions into these institutions. This has surprised all. The Ministry of External Affairs (MEA) has also questioned the deportation of these students. It is said that officials of the MEA have approached the US Department of State, the National Security Council and the Department of Homeland Security for clarification on the deportation issue. Their stand is if Hyderabad-based US consulate issued F-1 student visas and they carried the requisite I-20 forms issued by the said educational institutions certifying their admission then why US immigration department blocked their entry to the US? It is alleged that a couple of Indian officials who had gone to the San Francisco airport were not allowed to meet Indian students denied entry to the US.

It is a clear cut case of misbehavior on the part of American officials. In the past too, their misdemeanor and highhandedness with Indian ministers, diplomats and film stars have sent shocks down the spine of common Indians. Though these dignitaries were not subjected to deportation like Hyderabad-based students, but they were subjected equally to mistreatment and humiliation in the name of security check. In 2002 and 2003, the then Defence Minister George Fernandes was strip-searched twice at Washington’s Dulles International Airport. Former President Abdul Kalam was frisked at the Delhi airport by employees of an American airline when he was traveling to New York in 2009. Again in 2011, he was frisked twice at New York airport by American security officials, who had even taken his jacket and shoes to check for explosives. Meera Shankar was Indian ambassador to the US between 2009 and 2011. Despite being fully aware of her credentials and traveling on a diplomatic passport, the US security officials subjected her to a pat-down search in December 2010 at Mississippi airport. Reason given by US officials about her pat-down search was ridiculous. She was wearing sari and this was what raised US officials’ suspicion about her. Then in September 2010, the then Civil Aviation Minister Praful Patel was interrogated by US immigration officials at the O’Hare airport in Chicago as his name and date of birth matched with that of another Praful Patel who was on the American watch list. Similarly, India’s the then permanent envoy to the United Nations Hardeep Puri was detained for more than 30 minutes in a holding room at the Houston airport after he refused to take out his turban in December 2010. Noted film actor Shahrukh Khan, who was also detained in 2009, was stopped at New York airport by immigration authorities after arriving from India in a private plane with Nita Ambani to address students at Yale University in April 2012.

Each time such incidents occurred, US officials apologized for the inconvenience caused to these Indian nationals. But in the case of deported students, American authorities are maintaining stoic silence. What is worrying Indian officials is that US officials are deporting US-bound Indian travelers and businessmen too. Even those holding B-1 and B-2 visas-given to those who travel to the US temporarily for business, pleasure or medical treatment are denied entry to America.

However, in the case of deportation of only Telugu speaking students from the US, no specific reason has been cited.  But it is said that among Telugu speaking students, fascination for studying in America is very high. It turned into deluge after 1988 when Microsoft CEO Satya Nadella went to the University of Wisconsin, Milwauke after graduating in engineering from Manipal. It is said that students from Hyderabad outnumber students from any other region from India in several US educational institutions. Engineering and computer science happen to be preferred choice of Telugu speaking students studying in American institutions. According to a rough estimate, in universities like Northwestern Polytechnic in Fremont in California which have been blacklisted now, Telugus are said to constitute around 60 per cent of students. If media reports are to be believed, both these universities where Hyderabad-based students throng for study, look more like warehouses than academic institutions. They don’t have campus nor do they have sufficient academic faculties. But both students and management of these universities keep on parroting that they are legal academic institutes. If that is the case then why they have been blacklisted and why students seeking admissions to them have been denied entry to the US?

Amid swirling of controversy over Indian students’ deportation, there is a glaring fact and it is about well entrenched red-tappism and deep-seated hatred against Indians among a section of American officials.