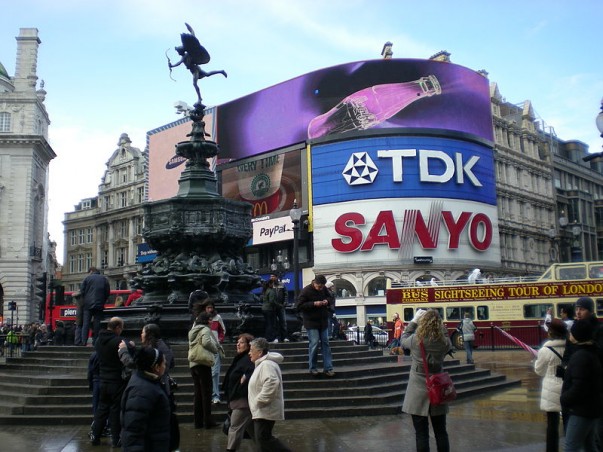 Piccadilly Circus is located at the junction of five busy streets and the area has been the place of congregation for the young and upwardly mobile crowds of London. The piece de resistance of Piccadilly Circus is the Shaftesbury monument. The areas surrounding the monument have now become a pedestrian mall.

The statue is popularly referred to as EROS who is believed to be the God of love. Piccadilly Circus' proximity to the key shopping and amusement areas and its central location in the middle of West End has made the area one of London's most vibrant and colorful squares.

The mere mention of Piccadilly Circus conjures up images of neon light advertisements, theatres, cinemas, pubs and top-end restaurants. Piccadilly Circus is encircled by many renowned edifices like the London Pavilion and Criterion Theatre to name just a few.

On the southern side of Piccadilly Circus is the famous Criterion Theatre, which can accommodate 600 persons at a time. The theatre was built way back in 1874 and presently houses the Shakespeare Company which is renowned for it's fast paced renditions of Shakespearean comedies.

A walk along the north-eastern part of Piccadilly Circus at the intersection of Shaftesbury Avenue and Coventry Street is the famous London Pavilion. In its initial years, it used to be a music hall but later on the edifice was merged with the Trocadero center, which is just a stone's throw away.

Over the years, this glitzy London neighborhood has become synonymous with the contemporary world's popular culture. The name Piccadilly Circus has been used and perhaps has also been abused to a large extent. For instance, Piccadilly Circus was the subject of a painting by renowned British painter Charles Ginner. The Rock band - Dire Straits have composed the song "Wild West End" which has the background of Piccadilly Circus. Renowned photographer Paul McCarthy also has an exclusive collection of photographs by the name of Piccadilly Circus.