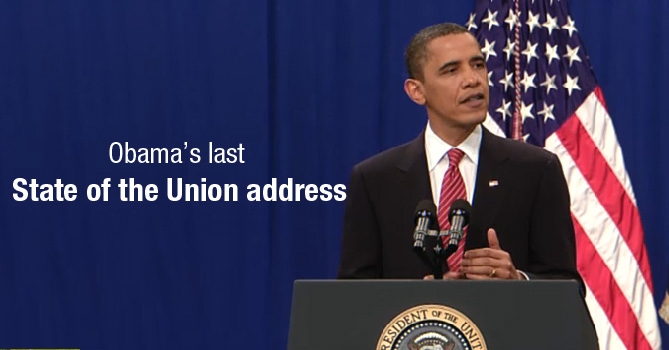 US President Barack Obama’s 2016 State of the Union address is his last as he prepares to step aside for the next President who will be chosen after the elections in November this year. So, as the President prepares to get eclipsed by a new candidate at the end of the year, he set on with an hour-long speech that touched upon some of the successes during the seven years of his tenure, some of which would enable him to leave a lasting legacy.

Apart from the eloquence, which has marked his other speeches, what is special about his final address to the nation that compels one to sit up and take notice?

Here we share with you some high points of his speeches that would provide you with an insight into the work done by the Obama administration.

There are people who are concerned over the state of the American economy. However, the President criticized the skeptics and insisted that anyone who believes that the economy is in decline is in fact peddling fiction.

The President painted a positive picture of the economy by highlighting positive facts such as the reduced unemployment rate. He described the US as the strongest and the most durable economy in the world. He lauded the strength of the auto industry and the fact that during the past six years, manufacturing has created 90,000 jobs. Obama summed up this achievement by saying that “We have done all this while cutting our deficits by almost three-quarters.

He acknowledged that the reason a lot of Americans are feeling anxious is that the economy of the country has been changing in a profound way along with technology. He said, “Technology doesn’t just replace jobs on the assembly line, but any job where work can be automated.”

The president spelt out his achievements in the education sector by stating that the bipartisan reform of ‘No Child Left Behind’ was an important start. Some of the highs in the education sector were an increase in early childhood education, increasing high school graduation rates to new highs, and augmenting number of graduates in fields like engineering. He went on to say that in the years ahead the country should “build on that progress” by providing pre-kindergarten for everyone, extending computer science classes and more. Commenting on the need to make college affordable for every American, the President maintained that student loan payments have been reduced to 10 per cent of a borrower’s income.

Affordable Care Act, which is also known as Obamacare, has at times been at the center of criticism. But the President sharing the statistics maintained that nearly 18 million have gained coverage so far. Commenting on the importance of Social Security and Medicare, he suggested that the programs should be strengthened. Acknowledging the fact that there would be disagreements on healthcare, he suggested that there should be other ways both parties can improve economic security.

Trying to assuage the feelings of an anxious nation, which is yet to recover from the barbaric San Bernardino attacks, the President said that ISIS fighters pose an great danger to civilians in the country and ought to be stopped but they do not threaten the country’s national existence. However, the President laid emphasis on going after terrorist networks such as ISIS and Al-Qaeda and protecting the people. According to him, with over-the top claims of World War III, the country is playing into the hands of the ISIS. Commenting on the success of the coalition, the President said how they are taking on the ISIS and are successfully training armed forces that are reclaiming land in Iraq and Syria.

At a time when America is reeling from the onslaught of gun violence, it was expected that the President would underline his achievements and future policies to protect Americans from gun violence. However, the President disappointed the audience with barely mentioning one the debatable topics in the country. The only reference to gun violence during Obama’s hour-long State of the Union address was a crisp statement that America must work on “protecting our kids from gun violence.”

Also a great deal was expected on the immigration issue, which is another hot topic tormenting America. However, just like gun laws, immigration was also summed up in few words – “fixing a broken immigration system.”

Reactions to the Speech

Just like any other speech made by one of the world’s greatest leaders, the 2016 State of the Union address, too, invited reactions from all streams of society. Some of the most vocal criticisms came from the Republicans. Donald Trump, the US Presidential candidate and the one known for his bizarre comments, tweeted that the speech “is really boring, slow, lethargic — very hard to watch!” Another candidate Texas Sen. Ted Cruz skipped the President’s speech to campaign in New Hampshire. He told media persons that Obama will only “demagogue” his record during the address. New Jersey Gov. Chris Christie, hit out at Obama by saying “The State of the Union isn’t a call to action, it’s a fantasy wish list by a president who has failed us,” Christie said. “It’s the world as he wishes it was, not the real world his failed leadership has left to all Americans,” Businesswoman Carly Fiorina said. “Instead of talking about solutions, he talked politics.”

Meanwhile, if the Republicans were hurling brickbats at the President, the Democrats were showering bouquets. They lauded Obama saying that in case a Republican takes over as the President of the country, all the progress that has been made during the past seven years would be undone. Bernie Sanders, Hillary Clinton and former Maryland Gov. Martin O’Malley posted on Twitter praising the President and highlighting that another Democrat must succeed him in 2017. Clinton praised the Obamacare and said that the people cannot place their healthcare in the hands of Republicans.