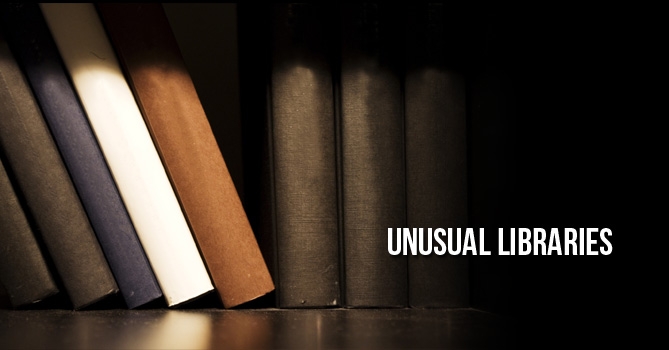 When we think of libraries the first image that comes to our mind is that of a building with pristine calmness, lots of books, and plenty of people in spectacles including the lady or gentleman who asks people to keep quiet every now and then! These are spaces where you are only allowed to read books and not utter a word or make so much as a sound lest other readers are disturbed. However, as times keep changing the world as we know it keeps pace as well and reinvents itself. The same applies to libraries as well. They keep getting innovated with an eye of delineating knowledge in new ways by people around the world.

This library is found in Kenya where there are plenty of nomadic races. Also referred to as library camels of Kenya they provide books to these people. The program was initiated during the 1980s. The camels normally sit at empty spaces and the readers can come, select the book they wish to read, read it, and then place it again in the trunk, being carried by the camel.

This is the first ever bookstore on water and a unique one at that. One can see this in Hordaland, a small county in Norway. It traverses across 250 tiny communities in the Fjords islands. This is an annual affair that takes place from September to April. The ship carries around 6000 books. On board, one can see the captain, a cook, a couple of entertainers such as a cartoonist and a clown, and obviously a couple of libraries.

This library is located in Argentina and shows the dark periods in the country’s history. This makes it a unique one considering it only chronicles the unsavory moments of the national history. It is a mobile library and possesses around 900 books. It looks like a tank, which can be interpreted as a tribute to the War of Independence fought by this South American country. It can be seen on the streets of Buenos Aires, as well as smaller towns where people do not enjoy similar access to conventional reading spaces. A unique aspect of this library is that it lets pedestrians borrow books.

This unique kind of library is more common than the other names in the piece in the sense that it can be seen in some counties of England and other locations across Europe. In case of these libraries, anyone who is passing by will be offered to read a book for free. These are primarily small libraries and can hold 10 books at the most. The target readership of these libraries is children who live in the locality. However, it has also been seen that some of these libraries have books for grown-ups and let them have those books in lieu of a marginal fee.

This library is seen in Colombia, where it has been initiated thanks to the efforts of a school master named Luis Soriano. He uses his donkeys in this case by loading books on their back and then goes to a rural area where there are no libraries. He provides these books to children, who these days have grown rather fond of this unique library and always keep waiting for it with the joy of reading and learning in mind. Regarding his library, Soriano says that the situation in rural Colombia is quite problematic since kids do not have access to secondary education and they have to travel for 40 minutes in order to get to a school. It is perhaps to his contribution that the library assumes such importance.

Library of Vienna University of Economics

This is one of the biggest libraries in the German-speaking world. It has at least 100,000 e-books as well as 600,000 books. The architecture of the building is stupendous as well with a polygonal block that is located at the midst of the new campus of the university. Zaha Hadid Architects has designed the same.

The unique aspect of this library, located in French Guiana, lies in the way its reading space has been designed. It is basically a combination of modern technology and conventional documentation. The interiors are primarily open areas with lots of reception spaces and areas that are separately earmarked for different kinds of research-based reading.

The library, located in Singapore, started to function from September 2006 and can be regarded as a metaphoric tree house. It primarily caters to people who live in the Bishan area and the schools. It has at least 250,000 books, which are spread across the basement and four floors above it. The readers also have the option of using the protruding windows in case they want some quite time or use their laptops.

Following are some other interesting libraries across the world: