This Physical Map of Niger displays relief, including plateaus, rivers, Intermittent rivers, mountain peaks, plains, and other topographic features. Niger is a country named after the Niger River is a landlocked country in West Africa. 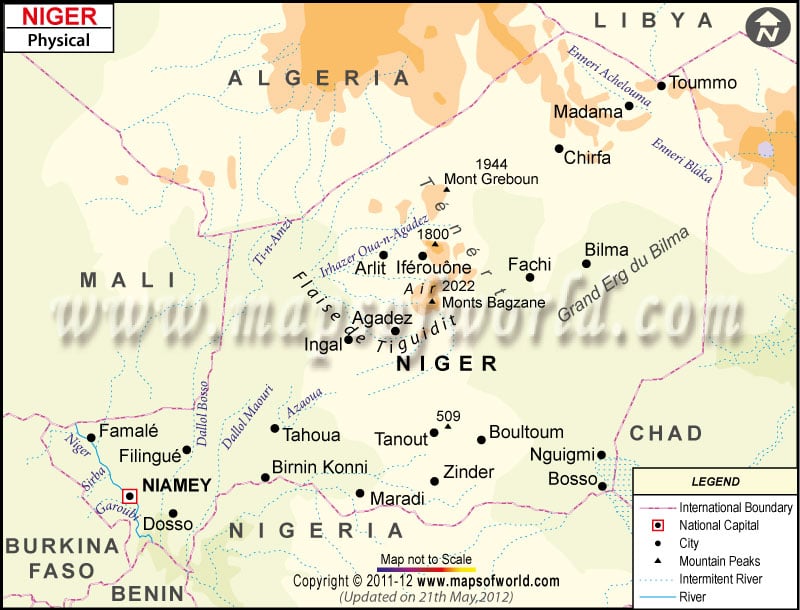 Niger shares its boundary with Chad to the east, Libya to the northeast, Benin and Burkina Faso to the Southwest, Nigeria to the south, Algeria to the northwest and Mali to the west. The country covers a total land area of 1,270,000 km2 (490,000 sq mi) and 300 square Kilometers (116 sq mi). Located in the southwest corner, the capital and largest city of Niger, Niamey, is marked on the Map.

Niger lies between latitudes 11.N. and 24. N and longitudes 0. E and 16. E can be seen on the Map. The Niger Physical Map is beneficial for school presentations and other purposes. A map legend at the bottom helps all the signs, characters, graphics, and symbols used throughout the Map. The highest point of the Niger is located at  Mont Idoukal-n-Taghes at 2,022 m (6,634 ft) in the Air Mountains, and the lowest point is the Niger River. Based on terrain, the country can be divided into the following  topographic regions:

Arid highlands in the north dominate the country. Air massif is a triangular group of granitic mountains rising from the Sahara in central Niger. Air Mountains is an extension of the Ahaggar Mountains of Algeria. These mountain ranges rise over 1,800 m (5,900 ft) and extend over 84,000 km2. These mountain ranges run north to south in the centre of Niger. The valleys of these Air mountains cut highlands of the north. A series of High Plateaus in the northeast forms a bridge between the Tibesti Mountains of Chad and the Ahaggar Mountains of Algeria. From west to east, the names of the Plateaus are Djado, Mangueni, and Tchigai.

Niger River is the most significant river in the country, crosses about 350 miles of Niger’s Territory to the west and forms the Niger River Basin. Lake Chad lies to the east. It is a large shallow lake that has an area of approximately 9,650 square miles. Another river is the Komadougu Yobe River which forms part of the frontier between Niger and Nigeria and flows in Lake Chad from the west. Bosso, the Foga, and the Maouri wadis are the other significant wadis.