Osaka Map shows the geographical location of various tourist places. Located 400 km to the southwest of Tokyo, Osaka is a major city in Japan. 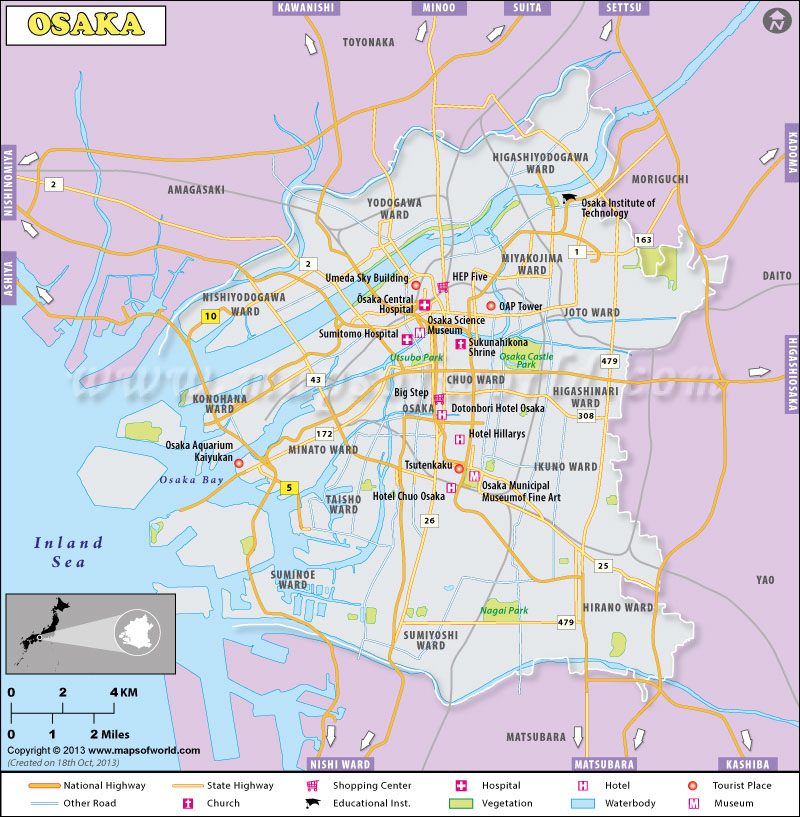 Description : The map shows the location of various tourist places, rivers, airports and much more in Osaka city, Japan.
0FacebookTwitterPinterestEmail

Osaka is Japan’s third largest city and a major commercial center in the Kansai region. Osaka has a very long history, dating back to at least the 5th or 6th century BC. The port made Osaka a strategic location for building a city, easily connected to other parts of Japan and good conditions for growing rice. The city became the capital of Japan for brief periods in its early history, and even after the capital moved to Nara, Osaka remained an important center of business. The arts and cultural scene in Osaka began to thrive in the 18th century, with Kabuki and Bunraku performance styles.

Osaka has grown to become a modern metropolitan city, with a thriving business, cultural and nightlife scene.

The city of Osaka sits along Osaka Bay at the mouth of the Yodo River and is known for its many canals and rivers, as well as the bridges that cross them. The bay leads out to the Pacific Ocean. The Yodo and Yamato Rivers are the major ones flowing across the city. Osaka is located on the southwestern side of the main Japanese Island of Honshu. The Kansai airport is located on an artificially created island in the bay. While the city itself is very urbanized, other nearby geographic features include mountains and the Kinai Plains.

There are several natural parks in the Osaka prefecture, including Kongo-Ikoma-Kisen, Meiji no Mori Mino, Hokusetsu, and Hannan-Misaki. To the east are the Ibuki Mountains and Ise Bay.

Osaka has two main airports: Kansai International and Osaka International (Itami). Kansai handles the majority of Osaka’s international flights, while Itami is focused on domestic flights, though both airports have international and domestic options. The airports are connected to the city by train or monorail. Visitors to Osaka can also arrive in the city by train, on one of Japan’s famous Shinkansen, or bullet trains. The central train station in Osaka is Shin-Osaka, where trains from Tokyo and Hiroshima, as well as destinations like Okayama and Fukuoka, arrive. Though the high-speed trains are fast and very efficient, they can be expensive without a rail pass. There are also buses, including overnight buses from Tokyo that arrives in Osaka.

Osaka has mild winters with not very much snow, and January is the coldest month. Spring and summer are the wet seasons in Osaka, particularly between May and July, getting hotter in July and August. In fall, temperatures decrease gradually.

One of the main attractions in Osaka is Osaka Castle, which has been reconstructed and can be explored inside and its outer gardens, which come alive during cherry blossom season. Another architectural attraction in Osaka is the Umeda Sky Building, which stands 40 stories high with an observatory level. The Umeda Sky building is unique for catering to lovers, where a couple can enjoy a romantic evening sitting in a heart-shaped light-up chair or secure a padlock to the seat, engraved with names or initials, symbolizing eternal love. The Tsutenkaku tower is a major landmark in Osaka’s skyline, which represents the reconstruction of the city after the war.

Museums in Osaka include the Osaka Science Museum and Museum of History, the Open Air Museum of Old Farmhouses, Peace Osaka, Kamigata Ukiyoe Museum, and Kaiyukan, a large aquarium. An amusement area is located along the bay, while the city also hosts Universal Studios Japan. Religious sites include Sumiyoshi Shrine and Shitennoji Temple.

Some inexpensive accommodation options in Osaka include the Business Hotel Chuo and Hotel Chuo Oasis and Selene, Hotel Raizan, and Hotel Taiyo. There are also traditional guest houses, Guest House Koma and Guest House U-en. A unique Japanese hotel option is the capsule hotel, such as Asahiplaza Shinsaibashi. Standard hotels near the city center include Hotel IL Cuore and Yamatoya Honten. For a luxury night’s rest, some hotel options are the Swissotel Nankai, Hotel New Otani Osaka, and Hotel Nikko Osaka.