Zulia is a Venezuela state in the northwestern region of the country. Zulia state in Venezuela surrounds Lake Maracaibo. This Venezuelan state covers an area of over 63,000 sq. km. and… 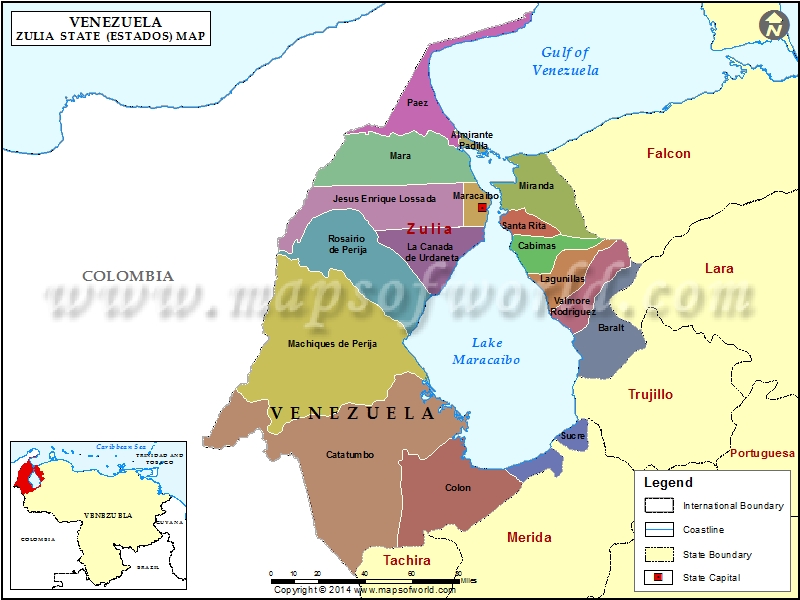 Zulia is a Venezuela state in the northwestern region of the country. Zulia state in Venezuela surrounds Lake Maracaibo. This Venezuelan state covers an area of over 63,000 sq. km. and has the Gulf of Venezuela to its north and Colombia on the west. This state having a population of approximately 3,052,000, has its capital in Maracaibo.

Zulia is surrounded by Falcon in the north east, Lara and Trujilo in the east, Merida in the south east and Tachira in the south.

The relief of Zulia in Venezuela is flat lowland. The northern division of the state is hot and dry, while the southern part is hot and wet. The climate is predominantly tropical, with the average maximum temperature of 33º C and the average minimum temperature of 26º C. The wet season in Zulia extends from May to November, and the annual rainfall measures up to about 50 cm.

Zulia attractions range from lakes and beaches to churches, monuments and cities. Maracaibo, Cabimas, and Ciudad Ojeda are important cities in this state. Lake Maracaibo is the largest lake in Venezuela. Cotorerra and Caimare Chico are two notable beaches of this Venezuelan state.