Estonia is a state located in north-eastern part of the European continent. It covers a total area of 17,413 square miles. The estimated population of the country is 1,340,194. As… 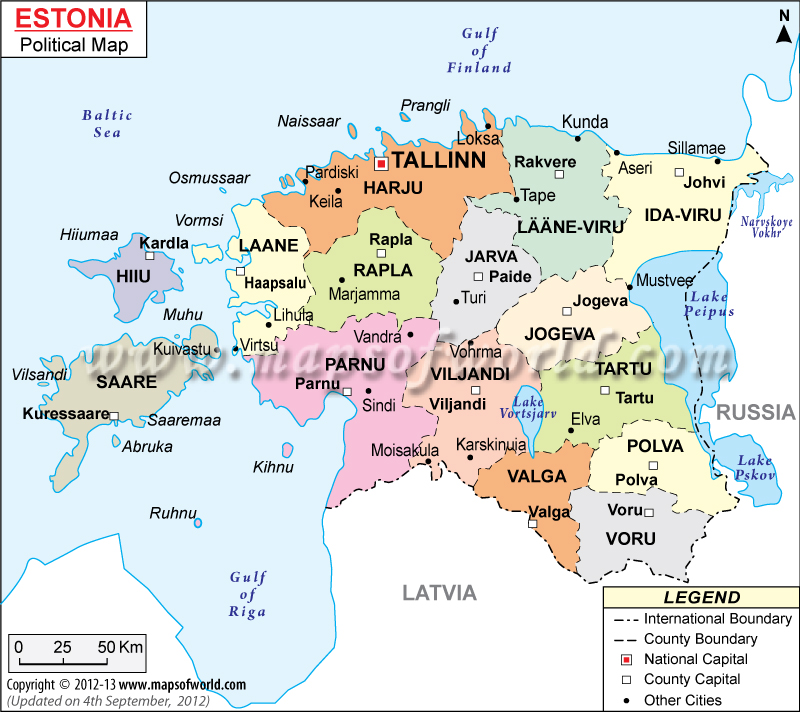 Description : Map showing Where is Estonia located in the World.
0
FacebookTwitterEmail

Estonia is a state located in north-eastern part of the European continent. It covers a total area of 17,413 square miles. The estimated population of the country is 1,340,194. As shown in the Estonia Political Map, Estonia shares borders with the Gulf of Finland to the north, Baltic Sea to the west, Latvia to the south, and Russia to the east.

The Estonia Political Map shows the national capital, major cities, counties, and the other political divisions. The map also highlights the national and international borders of the nation. Tallinn is the national capital and is situated on the north-eastern coast of the country. The capital covers an area of 61.5 square miles and houses a population of 413,727 inhabitants.

The other major cities in Estonia are Kardla, Johvi, Jogeva, Polva, Parnu, Kuressaare, Rapla, and Narva. The state of Estonia is a parliamentary Republic and the Prime Minister is the supreme head of the state. Andrus Ansip is the current prime minister of the nation.

The economy of Estonia is often described as the Baltic Tiger because of its rapid growth. Electronics, telecommunications, business services, retail, and information technology are the major sectors in the Estonian economy. The country is nicknamed E-stonia as it is almost completely wired. Skype, that offers free calls over the Internet to millions of people worldwide is designed by Estonian developers. Tourism also contributes to the country’s economy.