Download Azerbaijan Flag Outline Picture for kids to color The national flag of Azerbaijan consists of three equivalent horizontal stripes: blue, red, and green. In the center of the red… 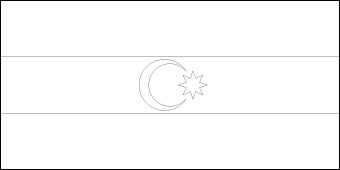 In the center of the red colored stripe of the Azerbaijan flag there is a white semi-circular moon or crescent and an eight-pointed star.The eight points of the star denotes the eight branches of the Turkic people. The blue colored stripe stands for the Turks, where as, the green is for Islam and red stands for progress.

Where is Azerbaijan located?