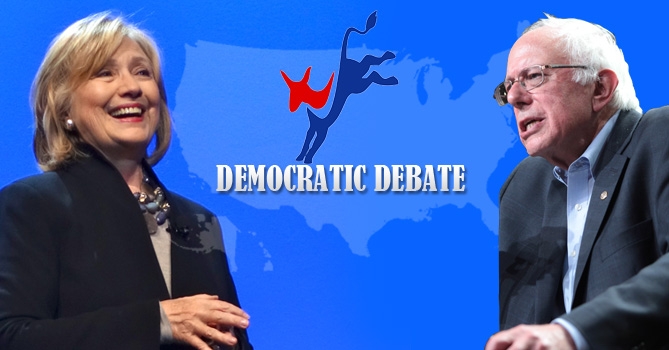 Candidates for the Democratic race to the White House clashed in a final television debate before caucuses in Iowa on February 1. Incidentally, it was also one of the liveliest debates and involved the three candidates – Hillary Clinton, Bernie Sanders, and former Maryland Governor Martin O’Malley. From the outset, the debate was dominated by the two heavyweights – Clinton and Sanders – with O’Malley trying vainly to assert himself, being relegated to the background.

The debate witnessed accusations and counter-accusations with the two front-runners lashing out at each other on a host of topics which included gun control, healthcare, foreign policy and banks.

Gun control continues to be one of the hottest topics in the United States at the moment. The spate of gun violence has left Americans shell shocked and they have been clamoring for restrictions that would help combat gun violence.

Thus, it was expected that the three candidates would talk tough on the issue. The debate saw Clinton and Sanders blasting each other. As the debate rolled on, Clinton came down heavily on Sanders and also highlighted legislation in which she showed her opponent supporting gun lobby. She charged Sanders with voting for the NRA and the gun lobby numerous times. Continuing her tirade against Sanders, Clinton also cited Sanders’ support for immunity for gun manufacturers, Brady Bill (Brady Handgun Violence Prevention Act), and the ‘Charleston loophole.’ Incidentally, it was a loophole that enabled Dylann Roof to procure a gun and shoot dead nine churchgoers at the Mother Emanuel AME Church in June 2014. She also called Sander’s Saturday’s announcement of backing a bill in the Congress that would repeal that immunity for manufacturers as insufficient.

However, Sanders hit back at Clinton’s criticism and pointing to his D-ratings from the NRA, called her argument “disingenuous”. In his defense he said that all along he has been saying that he would re-look at the issue.

All the three candidates were more or less in agreement over the foreign policy issues. All the three Democratic candidates said they were in support of how President Barack Obama was handling the rise of the ISIS and tensions with Syria. However, none said they supported sending ground troops to Syria. Sanders suggested bringing more allies in the fight against terror groups and also supported the warming up of relations with Iran. Clinton said she was proud of the Iran nuclear agreement. Citing her experience as the secretary of state, she said she “was responsible for getting those sanctions imposed.”

Discussions also revolved around the banking sector with Sanders terming it “very strange” that while kids caught smoking marijuana get a jail sentence, a bank can easily escape prosecution for indulging in criminal activity. Making a scathing attack on Clinton, Sanders accused his opponent for taking a whopping $600,000 from Goldman Sachs as speaking fees. But Clinton hit back at Sanders for his criticism of Obama’s donations from financial institutions.

Clinton was skeptical of the plan and said that it would “tear up” everything that had been accomplished by President Obama with the Affordable Care Act. She insisted that Obama’s Affordable Care Act should instead be improved upon.

Terming Clinton’s fears as ‘nonsense’, Sanders said that around 29 million people still did not have healthcare and something had to be done about it. He also blamed lobbyists and big money for blocking reforms.