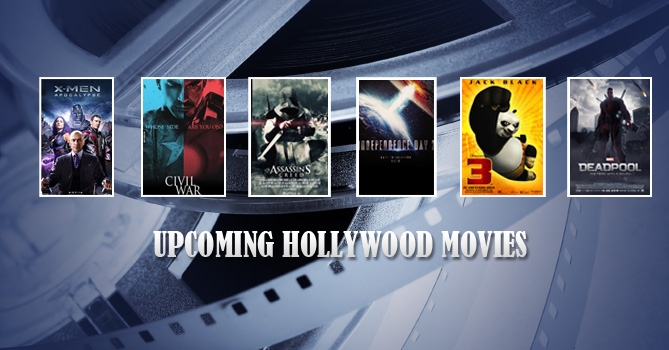 Batman V Superman: Dawn of Justice is one of the most awaited Hollywood movies supposed to come out in 2016. This film will see the clash, and eventual friendship, of Batman and Superman, arguably the most iconic superheroes of all time. The film stars Henry Cavill, Ben Affleck, Gal Gadot and one also gets to see Superman’s most famous villains Lex Luthor and Doomsday.

Produced by Marvel Films, this film has Ryan Reynolds in the titular role. This is basically the origin story of Wade Wilson, an erstwhile operative of US Special Forces, who later becomes the mercenary Deadpool when he undergoes an unauthorized experiment to cure his cancer. It helps him gain superhuman healing powers and soon he goes after the person responsible for all of this.

This is the sequel to the highly-successful Independence Day. Jeff Goldblum and Bill Pulman return from the previous film with the addition of Liam Hemsworth to the cast. In this film the aliens from the previous edition come back to Earth, where all the countries have used technology retrieved from aliens to build a massive program of defense and counter any future alien attacks.

This film sees the clash of good friends Steve Rogers aka Captain America, and Tony Stark, aka Iron Man over the issue of freedom for superheroes from government interference. It all starts when Avengers once again cause collateral damage with their operations and government pressure on them mounts. Cap wants the superheroes to remain free, only to be opposed by the Iron Man.

This film sees the reunion of Po and his biological father, who has been missing in action in the first couple of films. They go to a secret paradise of pandas only for China and its kung fu masters to be defeated by Kai, a supernatural villain. It is here that Po faces the biggest challenge of training his lethargic and laid back brothers in kung fu in order to counter Kai.

This film is based on a synonymous video game and stars Michael Fassbender in the main role. It is basically about Callum Lynch whose genetic memories are awakened by a groundbreaking technology and he discovers that he is a descendant of the Assassins, a secret society shrouded in mystery. He soon amasses incredible skills and immense knowledge and goes up against the Templars, an organization that believes in power and oppression.

This is a sequel of Finding Nemo and one sees Nemo, Marlin, and the Tank Gang – immense crowd favorites all of them – return. It happens a year after its predecessor and the California coastline acts as the setting for a part of the film. There are also some new characters that are supposed to play a major role in the life of Dory.

Teenage Mutant Ninja Turtles: Out of the Shadows

This film sees the return of the four turtles – Leonardo, Donatello, Michelangelo, and Raphael – to their crime fighting ways. Apart from the storyline the film also has a cast that is supposed to woo various sections of moviegoers. Megan Fox returns in the role of April O’Neill and Stephen Amell – already a famous name on the American TV circuit for his portrayal of vigilante superhero Arrow – will star as Casey Jones, a Turtles ally and a masked hero himself. WWE wrestler Sheamus will star in a villainous role.

This latest addition to the X-Men family tells the story of Apocalypse, the first ever mutant, who has been there since the dawn of civilization and taken away the powers of many other mutants thus rendering himself impenetrable and immortal. When he wakes up after thousands of years he finds the world in a pitiable state and gathers a group of powerful mutants to cleanse mankind and start a new era, only to be opposed by Professor X, Raven and some new mutants.

This film takes forward the Divergent series after the events of Insurgent. The titular characters Tris and Four look for solutions outside their comfort zone and their known world only for problems to compound and the very existence of mankind to be put to the test. The film sees Shailene Woodley and Theo James in main roles with Naomi Watts and Miles Teller for company.

Following are some other films to watch in 2016: