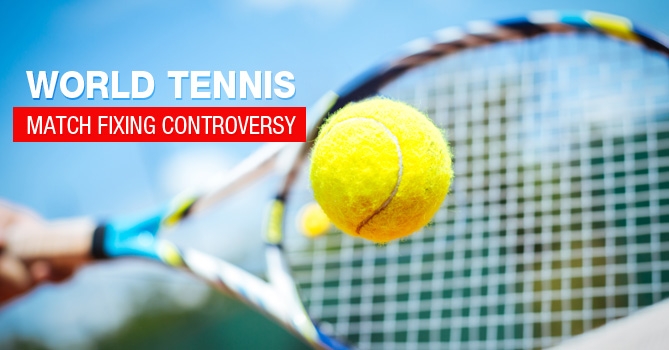 No, the situation is not so bleak to abandon your love for tennis. But yes, questions have been raised about the sanctity of the sport. The tennis world suffered a jolt on January 18, which was incidentally the opening day of the 2016 Australian Open, when Novak Djokovic said that someone tried to offer him $200,000 to lose a first-round match at a tournament in Russia. The moment of epiphany arrived on a day when the BBC-BuzzFeed report claimed having ‘enough evidence’ of widespread match-fixing in Men’s tennis.

What does the BBC Claim?

According to the BBC and BuzzFeed News, tennis authorities were provided with a report on investigation into 26,000 matches in 2007, three of them at Wimbledon, which had enough evidence to chase the offenders. Despite that, no action was taken.

The report claimed that there is a core group of 16 suspected men, including a US Open champion, who were possibly involved. The secret files obtained by the media houses allegedly contained evidence of suspected match-fixing in tennis. Those files, reportedly, indicate that the Tennis Integrity Unit (TIU) was notified about the 16 players who were suspected to have thrown matches.

What do Players have to Say?

Roger Federer calls the media reports “far-fetched” and finds it ridiculous to “answer something that is pure speculation.” According to the tennis legend, the governing bodies need to be “super aggressive” in preventing and punishing cases of match-fixing just like they are in case of doping.

Novak Djokovic, the 10-time Grand Slam champion who claimed having rejected an offer to lose a match early in his career, has his optimism intact. Although he came across some rumors of match-fixing in the past, he didn’t hear anything of that sort in the last six or seven years.

Serena Williams was not much amused about the goings-on. Her curt reaction: “If that’s going on, I don’t know about it. You know, I’m kind of sometimes in a little bit of a bubble.” While Djokovic had described match-fixing as “an act of unsportsmanship”, Serena was of the opinion that every player plays hard “to be not only great, but historic.”

Is TIU at Fault?

While the investigation report suggests that TIU allowed the players to compete despite being repeatedly flagged over their suspected involvement in match-fixing, Nigel Willerton – the head of the TIU – affirmed that “all credible information received by the TIU is analysed, assessed and investigated by highly experienced former law-enforcement investigators.”

The TIU – the policing arm of ATP (Association of Tennis Professionals) – claims having a zero-tolerance approach to betting-related corruption. That’s reassuring, especially, when you know that the 2007 ATP inquiry discovered betting syndicates in Russia, northern Italy and Sicily making millions of dollars on Grand Slam matches.

There is some element of helplessness that has stymied TIU’s prowess as an anti-corruption body. The introduction of a new anti-corruption code in 2009 has wiped out the scope of pursuing corruption cases that precede 2009. According to a TIU spokesman, investigations into corruption allegations mentioned in the 2008 report could not be pursued.

Lesson for Tennis Authorities and Players

One of the former tennis players is of the opinion that the authorities “have been complicit” in corruption since they failed to sensitize junior players about the pitfalls of match-fixing. Fingers have been pointed at them for not giving the players the impetus to report cases of corruption, because the latter feared of harming their post-retirement prospects. The tennis authorities have also been blamed for not doing enough to prevent suspected match-fixers from entering players’ locker rooms.

Roger Federer made a thoughtful observation when he said that every player should be encouraged to talk to the authorities. “The player,” according to Federer, “needs to feel he’s been supported by the tour, or whatever the governing body is, and that there’s a place he can go and speak about it.” He firmly believes that players should be supported and “told how to manage that.”