About City : Hargeisa is the capital of Somaliland, a self-declared republic in the country of Somalia. It is the second largest city after Mogadishu, the national capital. Hargeisa was part… 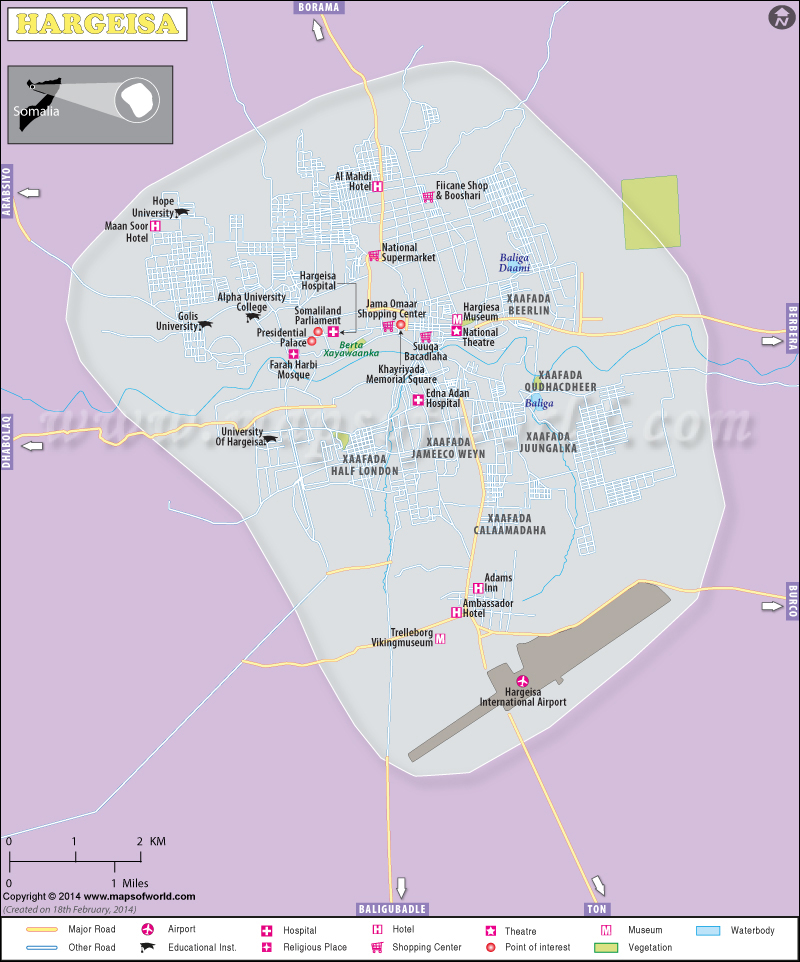 Hargeisa is the capital of Somaliland, a self-declared republic in the country of Somalia. It is the second largest city after Mogadishu, the national capital. Hargeisa was part of the Adal Sultanate’s domain during the Middle Ages. The British established a protectorate in the region in 1888 after signing successive treaties with the then Somali Sultans. This was administered from British India until 1898.

In 1941 it succeeded Berbera as the capital of the British Somaliland protectorate. The protectorate gained independence as the State of Somaliland on 26th June 1960, and later united with the Trust Territory of Somalia to form the Somali Republic. In 1991 the Somali central government collapsed and a civil war broke out. This resulted in the unilateral declaration of independence in the north-western part of the country, forming Somaliland. Hargeisa is currently home to more than 1.2 million people. The state religion of Somaliland is Islam. English, Somali and Arabic are the common languages widely spoken throughout the republic. Hargeisa is noted for the stone art present there since the Neolithic age.

Hargeisa is situated in the north-western Waqooyi Galbeed province of Somalia. It lies in an enclosed valley of the Galgodon highlands at an altitude of 1,334 meters above sea level. The Sheikh and the Daallo mountains are situated nearby. To the south lies the Haud savannah, famous for the different species of wildlife. Hargeisa is also situated near the town of Gabiley that serves as an agricultural center in northern Somalia. The city of Arabsiyo, famous for its lemon production, is also located nearby.

Hargeisa is served by the Hargeisa International Airport that connects the city with several locations in East Africa and other cities like Dubai, Mogadishu, Jeddah and Nairobi. Private carriers like Jubba Airways and Daallo Airlines offer domestic flights within the country. The easiest modes of public transport within the city are taxis and buses. Cars can also be rented at an affordable rate.

Hargeisa experiences a semi-arid climate with warm winters and hot summers. In spite of its location on the tropics, this city never faces extremes of temperatures due to its elevation. April to September are the wettest months. The ideal time to visit this place would be between November and February, when the temperatures are comparatively cooler with lesser rainfall.

Besides the traditional festivals of the Islamic calendar, Hargeisa does not celebrate many unique festival or event.

There are not many tourist sites in Hargeisa. The few attractive spots are as follows:

The only western-standard hotels in Hargeisa are the Ambassador Hotel and the Maan-soor Hotel that offer a variety of rooms and modern amenities. The other hotels present in this city include Oriental Hotel, Safari Hotel, Imperial Hotel and Sugal Hotel that offer fairly habitable rooms at an affordable rate.