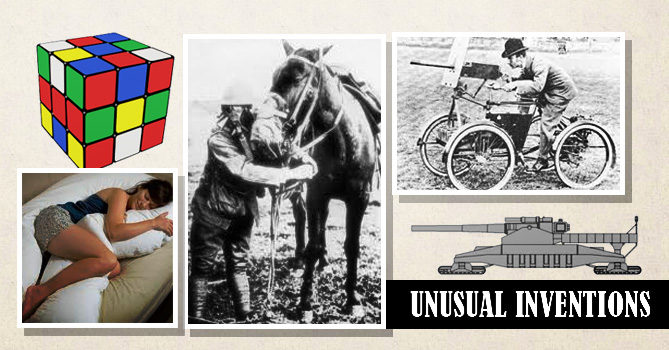 Scientists around the world have racked their brains for days, months and even decades to churn out inventions that have added enormously to upgrading our lifestyle. Inventions such as mobile phones, internet, computers, smart phones, to name a few, have really changed the way we live. But there are some inventions that cannot be considered as conventional as the ones mentioned above. In fact, these are somewhat trivial and may even go to the extent of being called bizarre. Nonetheless, as with every other invention, these too, have contributed, in their own small way, to human evolution, convenience or just plain amusement.

Let us take a look at few such inventions that deserve a place on this list.

In 1974, Erno Rubik – a Hungarian inventor – came up with a toy which would test your perseverance, persistence, and mathematical ability. The Rubik’s Cube, named after the inventor, has six faces which are covered by nine stickers in different colors of white, red, blue, orange, green, and yellow. The cubes should be arranged in such a way that each face should have a single color. Though it may sound easy, the Rubik’s Cube puzzle is a tough nut to crack. It was a craze among people and also led to a couple of championships such as the first world championship, which was organized by the Guinness Book of World Records in Munich in 1981. The puzzle was solved by Jury Froeschl in just 38 seconds. Now, that was an exception. For a vast majority, the Rubik’s Cube is one devil of a puzzle that would take more than a lifetime to solve but it would definitely stimulate your mind.

With the passage of time, we witnessed how wars become lethal with newer forms of weaponry being introduced to increase casualties in the enemy camp. Among these, one of the most lethal was the introduction of gas warfare by the Germans in 1915 during the course of the WW1. Very soon, both sides – the Central Powers and the Allied Powers – were resorting to this kind of warfare. However, inventors came up with a solution and created gas masks that would play a vital role in reducing deaths among soldiers. As horses were a part of warfare during WW1, gas masks were made for them too. The Germans developed many kinds of gas masks for horses. They even invented a gas mask for dogs.

It may be considered as a very trivial invention, but it would definitely help singletons overcome their pangs of loneliness. The rather unique Boyfriend Body Pillow has been designed by Deluxe comfort, a Michigan-based company, and would help a woman whose partner is away on business tours or military service to overcome loneliness. It would also be of help to women who are just looking for a companion. The pillow looks like the torso of a man. It has an arm which would hold the person all night. It is indeed a remarkable substitute for your often touring companion.

Between the years 1888 and 1889, Frederick Richard Simms, a British inventor, came up with a unique creation to give forces an edge over the rest on the battlefield. The Motor Scout, which was the world’s first armed vehicles, did look like a lean mean fighting machine and was designed to provide the infantry and cavalry with cover, especially in areas having good roads. The Motor Scout, which was a quadcycle, comprised a Maxim machine gun operated by the driver, which was set up above the front wheels of the vehicle. The driver was protected by an iron shield which was placed in front of the car. Simms never got a chance to know how lethal the weapon would be as it was never used in warfare. But it did inspire him to create a fully-armored car, which he named the Motor War Car. This has been considered the world’s first real armored car.

It was huge and lethal weapon that could have inflicted substantial damages on enemy lines and was the genius of a crazy Nazi mind. Though the German Ministry of Armaments had proposed a 1,000-ton tank, aptly titled the Landkreuzer P. 1000 Ratte, Krupp went a step ahead and designed the Landkreuzer P. 1500 Monster, which stood at a whopping 1500 tons. With a length of around 140 feet and armed with destructive weapons, the machine would have reduced to ashes whatever may have come in its way. Fortunately for the Allies, the bizarre invention never saw the light of the day as Albert Speer, the Minister for Armaments, canceled the project.

You are out of office with your lunch box planning to sit around some quiet place and have it peacefully. Alas, it is not to be so as as it has rained heavily and all the parks are muddy. With mud pools everywhere, there is no decent place for you to sit down and have a quick bite. But all is not as bad as it seems. South Korean designer Sung Woo Park has a quick solution for you. His unique creation – the rolling bench – would definitely come in handy during rainy days. The park bench rotates by turning the handle. So if it has been raining and you would like to sit down, just rotate the bench and make yourself comfortable on the dry side.