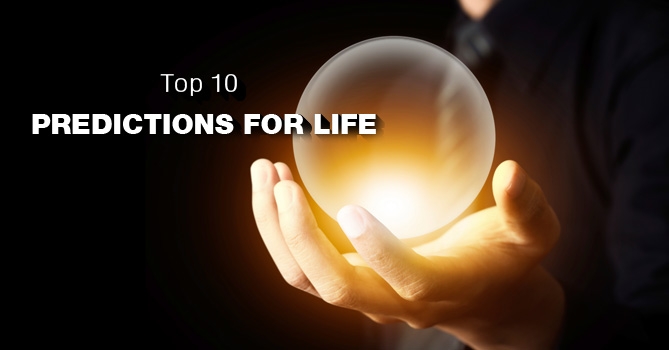 Seers and diviners across ages have always left behind predictions about the future and centuries to come. Some of them may be accurate while many others will have fallen flat. A look at the technological and scientific advances made by mankind and the general direction of our development, however, allows us to imagine how life will be a hundred years from now. Here are the top 10 predictions for a century from now.

The question of global warming and rampant pollution is probably the one that dominates our minds when we talk of the world a hundred years from now. It is highly likely that a century from now humans would have perfected weather control. Large domes of artificial atmosphere with temperature and control of climatic conditions shall enable the growth of perfect crops. Personalized weather control will still probably be a thing for the rich and mighty. This technology shall be used extensively in the other planets colonized by mankind. Add to this extensive and accurate prediction technology for natural phenomenon such as earthquakes and volcanic eruptions, and you have Nature preparedness.

Earth as we now know it is 70 percent water and 30 percent land. Most of the water (about 99 percent) is sea water. A hundred years from now, fresh water sources will have pretty much dried up. The natural corollary is that mankind will look at sea water and desalination as a possible solution for our needs. Artificial production of water from Hydrogen and Oxygen will be big business and due to extensive usage of sea and ocean water, the planet’s land water ratio is likely to be reversed (70 percent land and 30 percent water).

While Bitcoin may have failed to make it big, this is hardly the end of attempts at fashioning a global currency. It is tempting to think that the American Dollar may have the makings of a super-currency. If we, however, stop to consider the fact that a century from now notes and coins are likely to have become obsolete, it is highly probable that the new global currency that shall be used across the world will be a digital currency. If you think it is just about impossible to convince all the nations of the world to use one single currency, look at the EU and the success of the Euro and the idea of a global currency may not sound farfetched.

Much work has already been in this direction. Revival of extinct animal species (also called de-extinction) through the recreation of preserved DNA is likely to take much less than a century. Work on the revival of many animals such as the Quagga, the Woolly Mammoth, and the Pyrenean ibex are underway. In about another 100 years, Jurassic Park is likely to become a reality with dinosaurs and other ancient creatures roaming freely but in closely controlled environments. New global legislations will be in place with regard to such genetic manipulation, especially cloning.

Well honestly we’re hoping this one doesn’t take that long. Radical strides in immunotherapy and oncology hold out a great promise to find a cure for cancer by the end of this decade. What we mean by a cure for cancer is the ability to prevent its occurrence. Study of a person’s genetic composition is likely to reveal the probability and risk of the type of cancer and inoculation against cancer will be easy and effective a century from now. Not only cancer, HIV, diabetes, Alzheimer’s and each and every disease known to mankind will have a vaccine, or at least a cure. Life expectancy will be over a hundred.

The sun isn’t going away in the next 100 years. Solar energy will thus be our biggest source of power. The only other source of power on earth will be nuclear energy. Scientists are working on it and another century from now safe and renewable energy will not only be the in thing but perhaps be the only way ahead. Extensive use of nanotechnology to detect and clean up pollutants will be common. With just about everything being powered by solar power or energy from nuclear fission, fuel, wind and water power will be a thing of the past.

Those of us following the life and times of Dr. Stephen Hawking, the world famous physicist, already know how Intel, EZ Keys and other technologies have been used to minimize his physical input and to provide him an artificial voice. Building on this technology, a hundred years from now, systems are likely to be advanced enough to convert thought to speech making communication easy and seamless, even across great distances. Yes, writing with a pen and even typing out messages will be a thing of the past. We’re still not sure your spouse would want you to hear all their thoughts.

In another century while nutrition will continue to remain a biological requirement, food will become a matter of entertainment. Almost about all nutritional requirements for the day may be met by popping a pill. Eating out will still be in vogue but only as a source of entertainment. Almost all mechanical and even some creative jobs such as cooking and cleaning will be done by machines. For those who love to cook, special programs will allow you to rustle up your favorite dishes through a live digital panel while the actual motions are carried out by a machine or robot.

We’re assuming women will still love shopping and online shopping or virtual reality will still not fulfill their need to go out and visit stores. Only with human colonies in Mars and other planets, space is no longer likely to be a constraint. Travel and shopping may be an altogether different experience, though. Food kiosks are likely to highlight food nutritionally best suited for the shopper’s family while digital displays will allow the shopper to inspect her image in a dress she’s considering. And yes, all goods purchased will be delivered back home on Earth or wherever else before you get back through a space elevator.

This is not a prediction. It is more of a hope that mankind wakes up from this nightmarish environment of religious dissent leading up to violence and hostility. Faith and religion can be huge motivators and unless human beings understand that all religions advocate kindness and coexistence, there is not much hope that our race will exist for over a few centuries. Another century of evolution should teach us the futility of forced conversions and fighting over the superiority of any one religion. Only when religion becomes inconsequential in development and humane action, will we have any hope for our future generations.