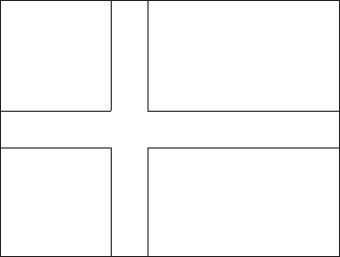 Download Picture of Denmark Flag Outline for kids to color

across the edges of the flag. The cross symbolizes Christianity and was later adopted by the Nordic countries including Sweden, Norway, Finland, Iceland, and the Faroe Islands. The color red stands for the courage, valor, and strength shown by the country men to protect the Kingdom from any foreign invasion. The Danish flag is among the oldest used national flag in the world. The use of the flag dates back to the thirteenth century when the Battle of Valdemar was fought. The battle was fought by the Danes to defeat Estonia and establish Danish administration in the country. After an unsuccessful struggle, the Danes were about to surrender. At the time a flag fell from the sky on June 15, 1219. The flag was believed to have been God’s gift and was named Danneberg. Since then, the flag has been used as the official flag of the Danish Empire. Every year on June 15, the Danish flag is hoisted to commemorate the anniversary of the Battle of Valdemar. It is also hoisted on other national holidays and days of national significance.

Where is the Faroe Islands Located