The People's Republic of China Flag is red with five golden stars in the canton. The flag of China was designed by Zeng Liansong and adopted on September 27, 1949. 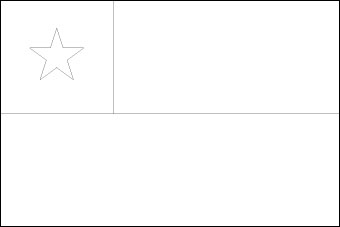 Download Picture of Chile Flag Outline for kids to color

About Flag of Chile

The national flag of Chile consists of two vertical bands of white and red. At the top left hand corner of the flag, over the white band, is a blue square which contains a white five-pointed star.

The white part of the Chile flag represents the snow covered Andes mountain range. The red band in the flag represents blood shed by the national heroes in the prolonged struggle for freedom in Chile. The white star is a symbol of honor and pride and the blue square signifies the clear blue skies of Chile.

Map of Chile with Cities