Burundi, known as the Republic of Burundi, is a landlocked country in the Great Rift Valley. It is one of the smallest countries in Africa. 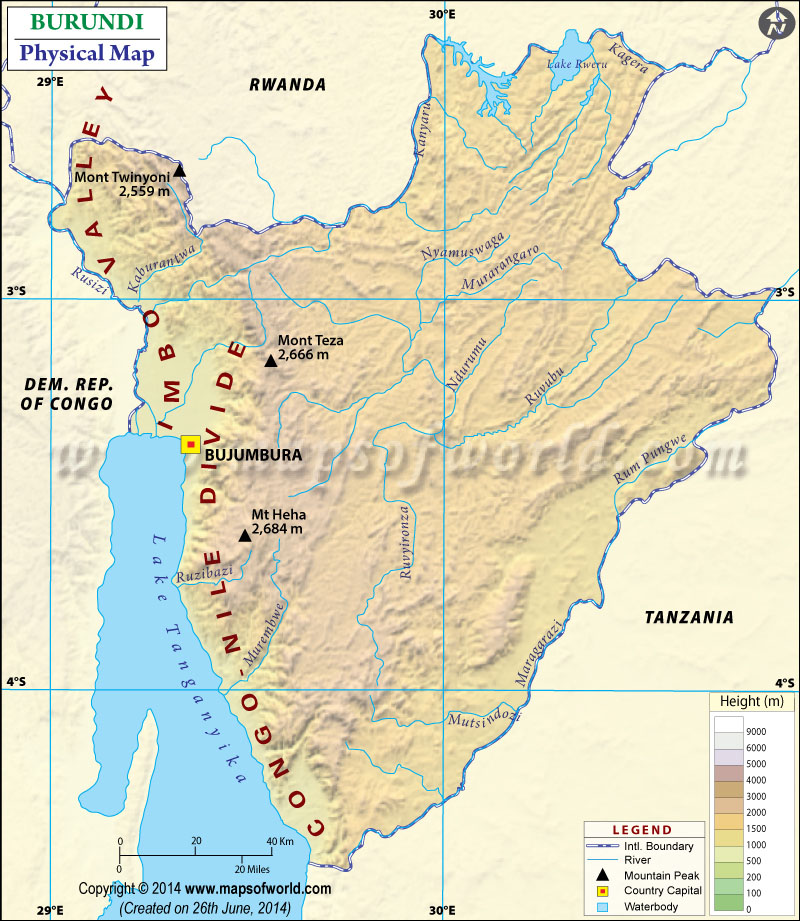 It is the region where East Africa converges with the African Great Lakes. It shares the boundary with Rwanda to the north, Tanzania to the southeast and east, Lake Tanganyika along its southwestern border, and the Democratic Republic of Congo to the west. The capital city of Bujumbura, which is also the largest city, is marked on the map.

A Physical map of Burundi depicts elevations, plateaus, water bodies, mountain peaks, plains, and other topographic features in detail. This map shows geography and trends in the height of Burundi. A map legend featured at the bottom helps all the signs, characters, graphics, and symbols used throughout the map.

The country of Burundi is a part of the Albertine Rift, which is the western extension of the East African Rift. Burundi lies on the rolling plateau in the centre of the African continent. The average elevation of the central plateau in Burundi is 1,707 m. The country has three major topographic regions based on relief features:

Rift Valley and Plains in Burundi

This region includes the eastern flank of the western rift valley. The area consists of the narrow plains along the Rusizi River and the eastern shores of Lake Tanganyika. The site includes belts of foothills on the western face of the Congo and Nile Rivers divide. This area comprises farmland and valleys. At the west edge of the country, the Imbo plain extends southwards. These plains are along the Rusizi River and grow from the Rwanda border through Bujumbura. This region belonging to the western branch of the Great Rift Valley is below 1,066 m (3,500 feet) in elevation.

This region includes the mountains that form the Congo-Nile divide between the basins of the Nile and Congo Rivers. It is located in the western part of Burundi. Burundi’s Mountains extend from north to south, covering the country’s entire length. These mountains form a series of long, narrow ridges, with an elevation of about 2,438 meters (8,000 feet) on average. They are mostly less than 16 kilometres  (10 miles) wide.

This region includes the drier and warmer plains near the country’s southeastern and eastern borders. They are located east of the Congo-Nile divide. These plateaus have an average elevation of about 1,525 m to 2,000 metres (5,000 to 6,500 feet). Cattle herders and farmers inhabit these plateaus.

Important River and Lakes of Burundi

The source of the Nile River is in Burundi. The Nile River is also linked from Lake Victoria to its headwaters via the Ruvyironza River. The Ruvyironza river flows northeast, cutting through plateaus. The other river known as Ruvubu extends the White Nile River. In the east, two critical rivers on the border of Burundi with Tanzania are Malagarasi and the Ruvubu River.

Lake Victoria is an important water source that divides into the Kagera River among the lakes in the country. Lake Tanganyika is a significant lake in the southwestern corner of Burundi, extending over 161 kilometres (100 miles). Apart from this, the country also has several smaller lakes, of which the largest lake is Lake Rweru in the north.