Burundi is a landlocked country located in Central Africa. It is divided into eighteen provinces. These provinces, along with their capitals, are shown on the political map. 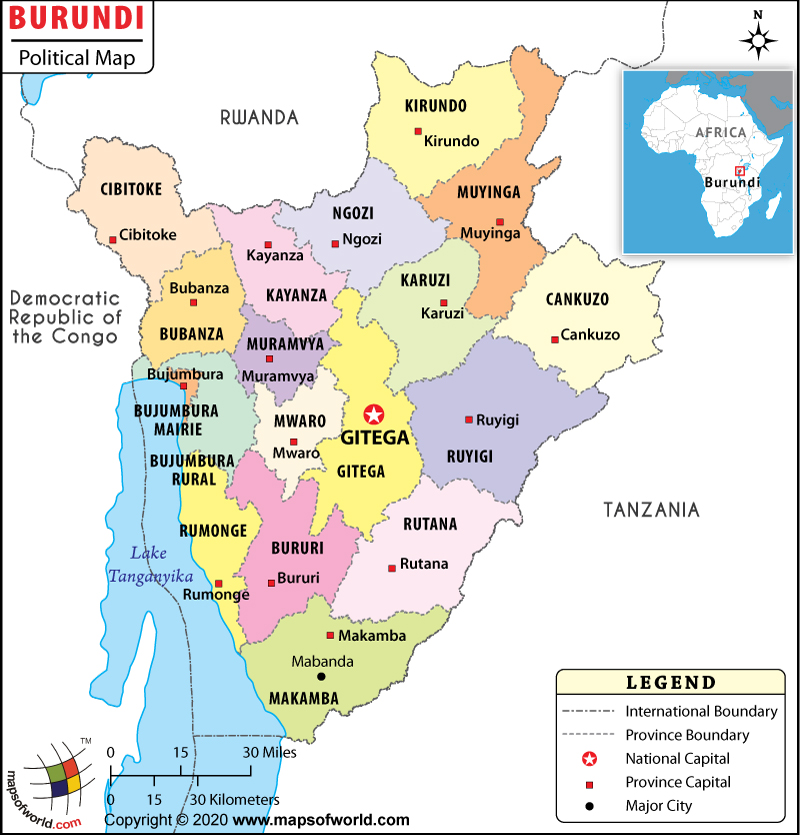 Burundi is a densely populated country located in Central Africa. It covers a total area of 10,745 square miles, with an estimated population of 11,530,000.

As shown in the Burundi Political Map, Burundi is a landlocked country in east-central Africa, bordered on the north by Rwanda, on the east and south by Tanzania, and on the west by the Democratic Republic of the Congo.

The national capital, Gitega, is clearly shown on the map. It was moved from the city of Bujumbura (which is near Lake Tanganyika) to Gitega, which is 39 miles (63 km) further inland, in January 2019.

The Burundi Political Map highlights the major cities, provinces and their capitals, national and international boundaries of the nation.

Burundi is a unitary dominant-party presidential constitutional republic. The President of Burundi is both head of state and head of government. Évariste Ndayishimiye is the president of the nation since June 18, 2020.

Burundi is a densely populated country with a majority of the population living in extreme poverty and hunger. Poor education, unhygienic living conditions, scarcity of food, water, and medical facilities, and corruption are other major problems. HIV/AIDS is rampant in Burundi and continues to tear its economy apart.

Where is Cameroon Located