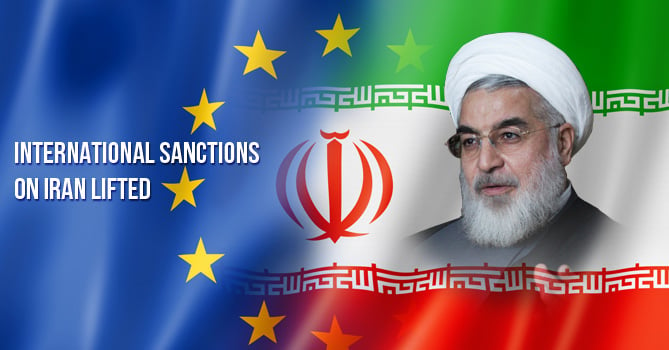 Iranians are on cloud nine as international sanctions imposed on the country have been lifted. After the International Atomic Energy Agency (IAEA) certified that Iran has completed the necessary preparatory steps to implement the nuclear deal it had signed with Western powers, sanctions were lifted.

Following this Iran would not only be able to trade its oil across the world, but also secure its money back from foreign banks where it is locked. Around $100 billion worth of Iranian money is locked in foreign banks. India also owes around $6.5 billion to Iran and it would release it after sanctions have been withdrawn. Significantly, the world’s 7th largest producer of crude oil, Iran would now be able to increase its oil export to 300,000 barrels per day.

With this Tehran is confident to mop up $250 billion revenue in the current financial year, despite fall in international crude oil prices. In that way, the withdrawal of sanctions which was precisely done after US President Barack Obama signed an executive order on January 17, has provided Iran much sought after opportunity to gain its financial muscle and prestige in the world. It would be able to develop irrigation system, rickety infrastructure and modernize business and commercial sectors. Already, Iran is negotiating with both Airbus and Boeing to acquire 500 commercial jets of various models at a cost of $50 billion. By 2020, it is estimated that Iran will need 400 passenger planes for its long and medium-haul fleet and another 100 planes for local airports. All this is in the background of the fact that Iran is expected to witness an economic windfall of enviable capacity within a few years. If some financial experts are to be believed, Iran’s GDP might surpass that of Saudi Arabia and Turkey-considered to be regional powerhouses.

Before sanctions were imposed on Iran, Tehran used to plead that its nuclear program was for peaceful purposes and that it was never involved in clandestine weaponization program. The international community was not at all convinced with its response. Particularly, the West was not ready to buy Iran’s argument that it was not involved in uranium enrichment program. Feedback given by intelligence agencies and Israeli security establishment always appeared to be spine chilling to Westerners. Iran was looked at by them as a renegade state with capability to produce nuclear weapons. A raft of sanctions between 2006 and 2010 was imposed on Tehran by the United Nations, the United States and the European Union to make Iran abandon its nuclear program. Such measures, however, severely affected Iranian economy; value of Iranian riyal fell, food and fuel prices soared up very high—all this left ordinary Iranians with little resources to meet their basic needs. Not only that supply of high-end defense technology, trade in precious metals, banking transactions, individual travel were also banned.

On April 2, 2015, foreign ministers of Iran, Germany, the European Union, the US, the UK, China and Russia held a meeting in Switzerland’s Lausanne city. They announced Iran centric nuclear deal framework. Under this framework deal, Iran agreed to redesign, convert and reduce its nuclear facilities and accept the Additional Protocol of IAEA (It is a legal document that supplements IAEA’s safeguards agreements) in order to lift international sanctions. It was a baby step in the direction of a final deal that Iran signed with the US and five other powerful countries of the world in July last year.

Under the deal Iran was asked to cut down by two-thirds its 6,000 number of centrifuges (5,000 at the country’s Natanz facility and 1,000 at its Fordow facility) for a decade. It was asked to use first generation IR-1 centrifuges, and also asked to give up other models. Notably, centrifuges are pieces of equipment which is used to enrich uranium into a nuclear fuel. That meant Tehran would be left with a smaller nuclear program in terms of its ability to create nuclear fuel or nuclear material for a bomb.

Iran was allowed to enrich uranium to only to 3.67 per cent. It was allowed to turn raw uranium into the kind of fuel that could be used for a nuclear power plant. It was also required to reduce its stockpile of enriched uranium from 10,000-kg to 300-kg for 15 years. That meant Tehran would have to give up a stunning 98 per cent of its nuclear stockpile. Then as per the agreement, Iran was required to rebuild its plutonium plant at Arak, lying 260-km away from Tehran. Western powers suspected that Iran-built facility at Arak for making and storing potentially weapons-grade plutonium. Their fear was that once it got operational, it would provide a significant supply of plutonium-one of the two materials, along with highly enriched uranium, that can produce a nuclear explosion.

International nuclear watchdog in its January 16 report to the UN Security Council said that Iran has carried out all measures required under the deal. It also reported that Iran would start implementing the Additional Protocol to its safeguards agreement with the IAEA. Only after this, the US President authorized lifting of sanction on Tehran. But then he did not hesitate from imposing fresh sanctions on Iranian companies and individuals after it recently conducted ballistic missile test. Though not as draconian as economic sanctions, the fresh imposition of restrictions would have a binding effect on 11 Iranian entities and individuals linked to the country’s missile program.