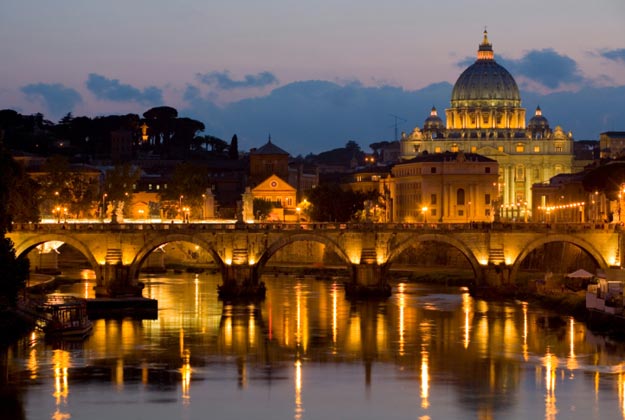 The seat of the Pope, the worldwide head of the Catholic Church, the Vatican is an independent state within Italy. Many pilgrims make the journey to Vatican City every year, and many of these attend a public appearance by the Pope or attend mass. Vatican City includes the Saint Peter’s Basilica (Cathedral) and Piazza (square), the Vatican Museum, and the gardens. Some of the monuments feature the world’s most beautiful sculptures and paintings. Much of Vatican City is not open to the public, guarded by the Swiss Guards who wear distinctive uniforms.

Entrance to the Basilica is free, but there is a fee to climb the 323 steps to the top of the dome, and for a bit extra, you can take an elevator up part of the way. Below the main level, visitors can see the tomb of Pope John Paul II. A dress code is enforced for entrance to the basilica – no bare shoulders or shorts are allowed.

The Vatican Apostolic Library is one of the oldest libraries in the world. It houses many collections of great historical significance. Presently, the library features 75,000 manuscripts and over 1.1 million printed books.

The Vatican Museum contains the Sistine Chapel, with the world famous ceiling frescoes of Michelangelo. The Chapel is the official residence of the Pope. The Chapel has been named after Pope Sixtus IV, who is responsible for the restoration of the Chapel between 1477 to 1480.

The economy of Vatican City generates income from the entry fees of the museums, sale of postage stamps, publications and tourist mementos. Where is Vatican City - Rome?

Vatican City is a sovereign city-state within Rome, Italy. As it is the smallest city in the world, it has limited transport options with no airports or highways. Vatican City has one heliport, located in the western corner of the city to be used by the officials and Holy See. The public can use the 4ft. 8 1⁄2in. gauge railway connected to Italy, at Rome’s Saint Peter’s station. They can also use Metro services to reach Vatican. The nearest station to St. Peter’s Square is Ottaviano. Horse and carriage, bus and taxi are other options of transportation in Vatican City.

Vatican City and Rome get very hot, humid, and crowded during the summer, and tourists fill the Basilica and museum. If you’re hoping to catch an appearance from the Pope, the summer is the worst time to visit, as the Pope usually leaves the city for the season to enjoy the cooler weather at his summer residence in Castel Gandolfo. Spring and autumn are better times to visit, with fewer tourists and better weather.